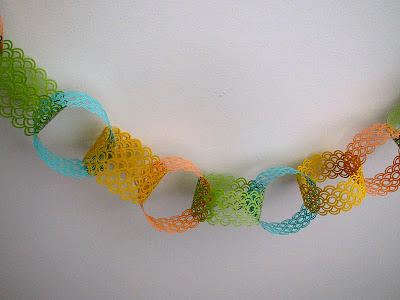 For several weeks now I have been completely besotted with this project from the Crafts Dept. at Martha Stewart. I borrowed the photo from their blog, just to get that straight. ;-)

They used paper punches for that paper chain!! How friggin’ cool is that? I’m not much of a paper crafter, but I. Have. To. Have. some of those punches!! Check them out:

Double Arches -that’s the one used in the photo. Unfortunately, I can only find a set of this design, doesn’t seem like the punch is available on its own. Go figure, it’s my favourite!

I’ve been trying to find them overhere, but wow, I had no idea that punches were so expensive! And it’s even more expensive here because the price tag is the same in $$ and ££, so for example a punch that costs $17.99, also costs £17.99 which is actually almost $30!, So almost a third dearer. WTF?

So I guess I’ll have to wait until I win the lottery… in the meantime I might go lust after these fringe scissors, which are a bit more within my non-lottery-winner budget! ;-)