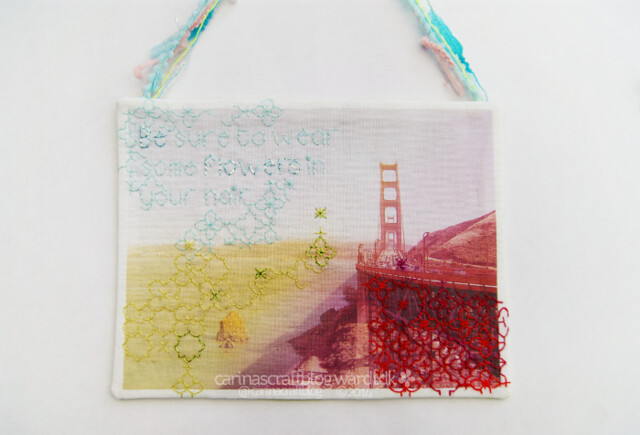 I took part in our recent swap over on the &Stitches blog and this is what I sent to my partner, Rebecca of Hugs Are Fun. The theme for the swap was ‘Places’ which could be interpreted pretty much any way we liked. We talked a bit back and forth about places that mean something to us.

I decided to do something related to San Francisco where Rebecca and her husband went on their honeymoon. During our email conversation, Rebecca mentioned that she really likes the Golden Gate Bridge. It just so happens that I’ve been to San Francisco and one of my favourite photos from the trip is one of the Golden Gate Bridge. So I just had to use that in some way!

I played with the photo to give it a sort of vintage-y nostalgic feel. Then I printed it on fabric using the freezer paper method. 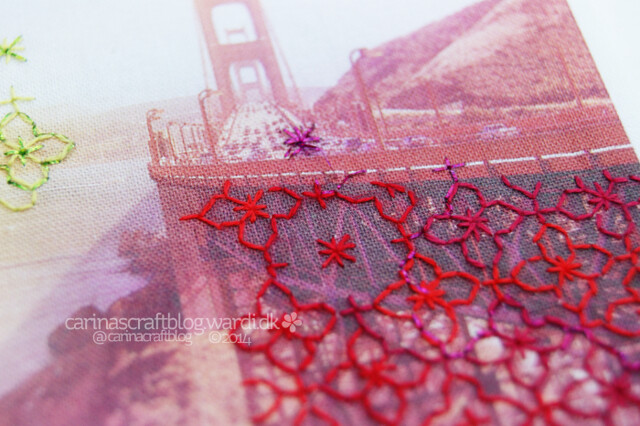 I did consider embroidering something free form, maybe some flowers, but looking at the grid on the bridge it simply demanded some blackwork. Also, I’m kinda obsessed with that, you know. ;-)

I used waste canvas so I had a grid to stitch on and then I just started in one corner. I also added a bit of song lyric, because, well, it’s San Francisco. ;-) 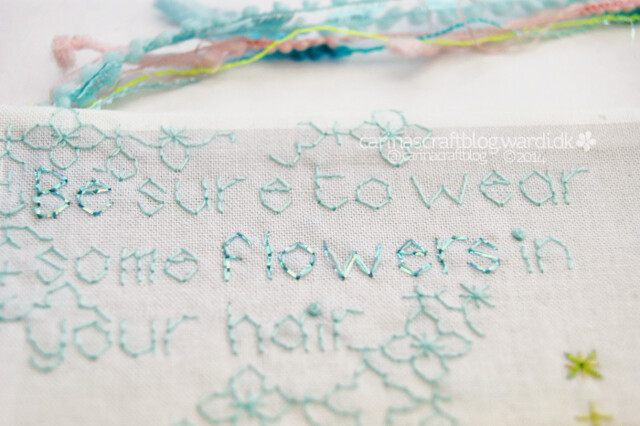 I added a bit of sparkle with some Kreinik filament. Not all over, just in a few spots to catch the light.

The piece is about the size of a postcard and the more I think about it, that’s exactly the right thing, because it’s like a memento from somewhere special.

The piece hangs from some pretty fibres I have had for a while – on a few occasions I’ve thought about getting rid of it, because I didn’t know what I was going to use it for. Now I’m glad I didn’t! And because I wanted a bit of neon in there, I made a teeny braid from sewing thread. Crazy stuff. ;-)

I was kinda nervous about what Rebecca would think of what I had made, and I am sooo happy that she likes it!