This week… at first I couldn’t really think of any favourites, because I felt like I’ve not done anything or listened to or watched anything interesting. But of course, the whole point of this exercise is to look at bit closer and appreciate things AND notice when you appreciate things. If that distinction makes sense?

So first up is the London Modern Quilt Guild, LMQG for short. We have a monthly meeting, usually on the first Sunday of the month, which I went to on Sunday. On the way home on the train, I got to thinking how happy I am that I joined the group. And how much I look forward to the meetings.

Their talents are many and varied, and I am really quite in awe of their skills. But the best thing is the wonderful accepting attitude towards any quilt that you want to show (or bag or knitting). LMQG is part of the larger organisation called the Modern Quilt Guild, but and I don’t know what other groups are like, but I feel like there isn’t a dogmatic attitude towards what people bring to show and tell at the meetings. Yes, it’s ‘modern’ but everyone appreciate the work that goes into any quilt. And I love that. Plus, it’s a lovely gang of ladies. If you’re interested in (modern) quilting and you’re near London, do join us! :-)

Do you know about Bandcamp? It’s a site where people can indie publish their music, of all types. You can listen to the music for free and if you want you can buy a song or album. Often, you can set your own price and sometimes there’s a minimum price. It’s also kinda like a social network for music, you can follow people (me) and discover music through them and I think you can even buy music for them from their wishlist.

I have been listening to the Sketches album by Sergey Akhunov as played by Polina Osetinskaya and Ilya Hoffman. It is beautiful and dreamy and moody piano and viola. 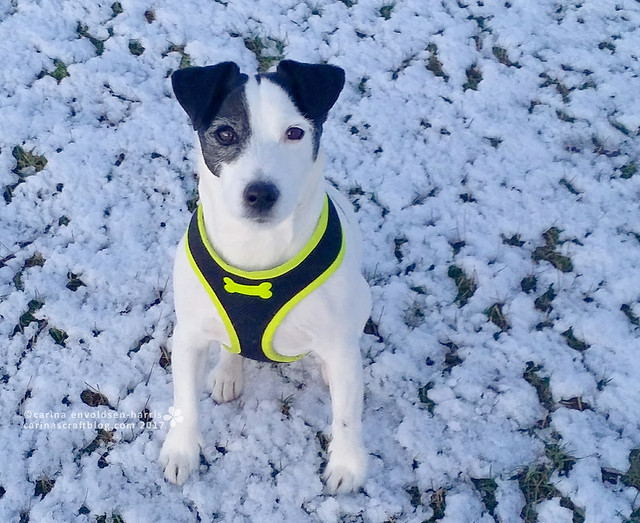 Last night it snowed! It’s probably 6-7 years since we last had proper snow – meaning, snow that actually settles and stays overnight. It’s all gone now, sadly. We walked Blake in the snow last night and he LOVED it! Unfortunately, it was too dark to video it but it was hilarious! He was running around, rolling in the snow, chasing snowballs. He was so excite. He may never have seen snow before, there certainly hasn’t been any while he’s been with us. We reckon he’s around 7ish years old, so it could be that this was his first experience of it.

We walked over to the field this morning, I thought he’d have another happy run around, but it was bitterly cold so we had to come back without further snow-frolicking. Fingers crossed we’ll have more snow this winter. :-)

Speaking of Blake, he tried another new thing last weekend: doggy daycare! We weren’t sure how he’d react to that, being left on his own in a strange place. But he enjoyed it as far as we could tell, he was certainly filthy from playing outside! And the staff said he was good as gold, so that’s promising.

It’s good to know that we can take him there so we can go out for the day without worrying about getting back home within a few hours so he can be let outside.

At the weekend, I finally bought veggies from the market that rolls into Grays on Friday and Saturday. I’ve been meaning to do that for ages, but we don’t always go ‘down town’ and I kept forgetting etc etc. I got four beautiful red peppers and almost a kilo of tomatoes on the vine for just £2. Definitely going to do that again! I don’t know where those veggies came from but I’d assume it’s somewhere close-ish – instead of being flown in from Spain or whatever. :-)