If you don’t care much for drawings, you might want to skip this post, because it is full of ’em! These are the drawings I made in London on December 31. I’ll tell you a bit about each of them. And tell myself, because surely there will come a day when I can’t remember it any longer. ;-) 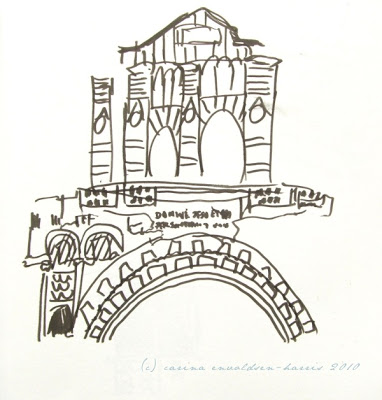 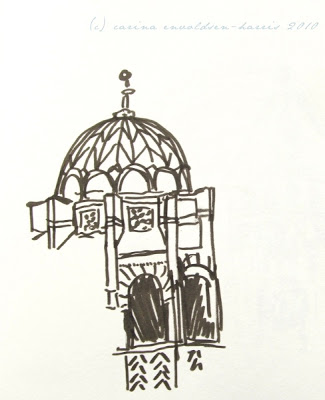 Both this and the one above are fairly rough, it was really cold and drawing outside might not have been such a clever idea. But hey. As I was drawing this one, a Korean (I think, but I didn’t ask!) man came up to me and asked if it was Westminster Cathedral. And told him yes and he and his family shuffled off. But before he had gone more than a couple steps away, he came back and, looking into the sketchbook, said “Are you painter?”. How could I not say yes to that?!! Then he wished me a happy new year and went into the cathedral. How much do you think that made my day!? :-) 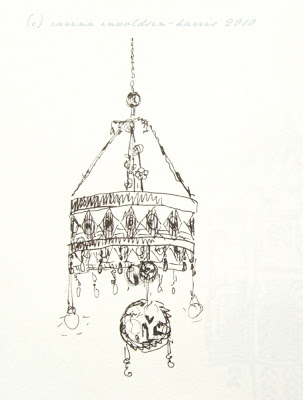 I couldn’t stand the cold any longer, so I went into the cathedral too. This is a chandelier (is that what it is called in a church?) in the side chapel on right, right at the bottom of the cathedral. It was quite complex and the light was behind it, which didn’t make it easier to draw! 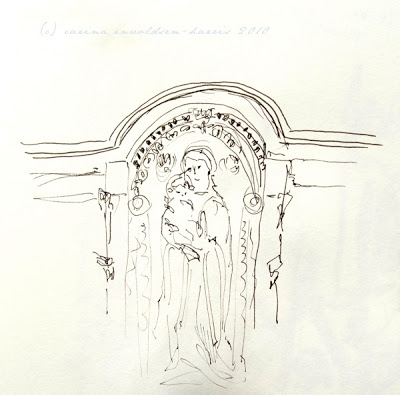 This was in the centre in that same side chapel. In mosaic, and quite beautiful. In fact, if you happen to be in the area, you should go visit the cathedral just to see the beautiful and colourful mosaics throughout the place. 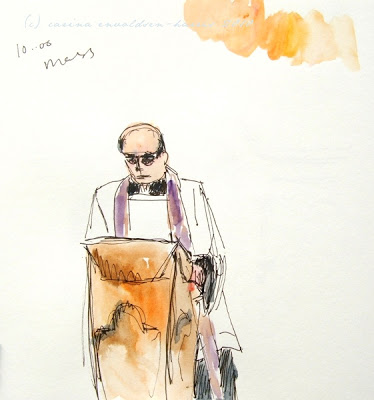 When I had just finished the previous drawing, this chap came out and started a mass/service and because I was sitting quite close, I thought it’d be kinda rude to stand up and go. So I drew him instead. It wasn’t a long service, and only 3 people were ‘in attendance’. 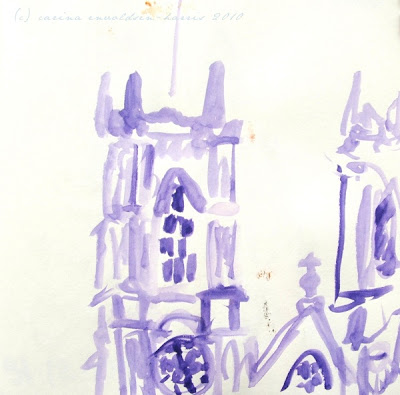 Ok, I left the cathedral and walked across the street to the shops opposite, some of them looked very posh. Only went into M&S and Monsoon. Not too posh. After I got a bit warmer, I braved the cold and walked down Victoria Street to Westminster Abbey.

Across the street from the Abbey, there was a low wall where I could sit down. So I sat down and got out my ‘equipment’. I used watercolours because I knew if I used a pen I’d want to spend way too much time on every little detail. And it was too cold for that. And it was almost too cold for watercolours, because it was all that I could keep the colours moist enough for a few strokes. That’s the reason why the colour is quite uneven in places. 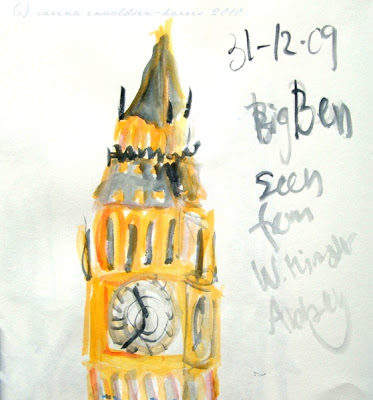 From where I sat I also had a view to Big Ben. Which of course isn’t the name of the tower itself but of the bell inside it. What the tower is called I do not recall and it doesn’t really matter either.

I knew that Parliament and the Abbey were close, but I didn’t realise how close. It’s probably no more than a five minute walk. I also didn’t realise that Downing Street is also only about five minutes from Parliament; Tony pointed it out to me as we drove past it in the morning.

It was strange driving in London in our own car. Haven’t done that before and we only did it because it was likely not to be very busy in London and because there was no congestion charge between Christmas and New Year. Driving along the Thames we could see all the preparations for the celebrations in the evening. 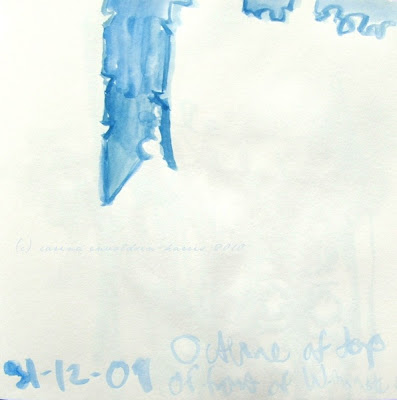 Westminster Abbey again. Or rather, the sky around it. Avoiding too many details again! 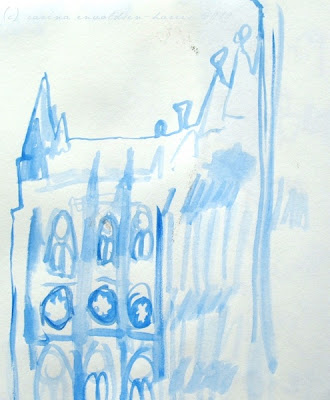 And again. With a bit more detail, but not too much. It’s funny, whenI made this one, I wasn’t very happy with it. But now I quite like it. It is quite etheral… 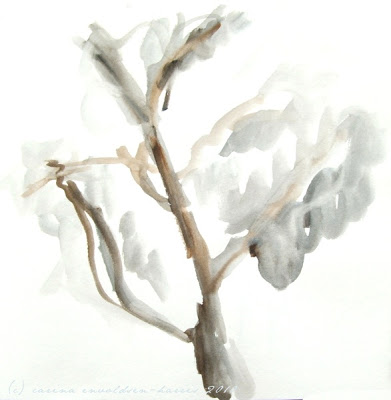 This tree is in the small patch of green in front of the Abbey. Another one I wasn’t impressed with when I made it, but now I like it. It has only the slightest resemblance to the actual tree. But that is ok. Sometimes it’s better when things are what they are and not what they are supposed to be… 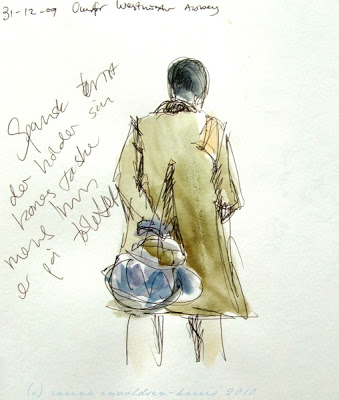 There were of course quite a lot of people at the Abbey, lots of crazy tourists braving the cold (I did mention it was cold, right?!). I made some attempts at drawing some of them, but they never stayed still for long. Except for this chap who was waiting for his wife while she was in the loo. I am not sure if I heard them talking together, but they just looked Spanish.. He was a proper gentleman, too, holding her bag while she was gone.

When they left I decided to leave too, walking back up Victoria Street to Sainsbury to get indoors. Walking there I could barely feel my feet: It Was Cold!

Definitely not the last time I go on a drawing adventure in London, but maybe not in the middle of the winter next time… Anyone care to join me? :-)