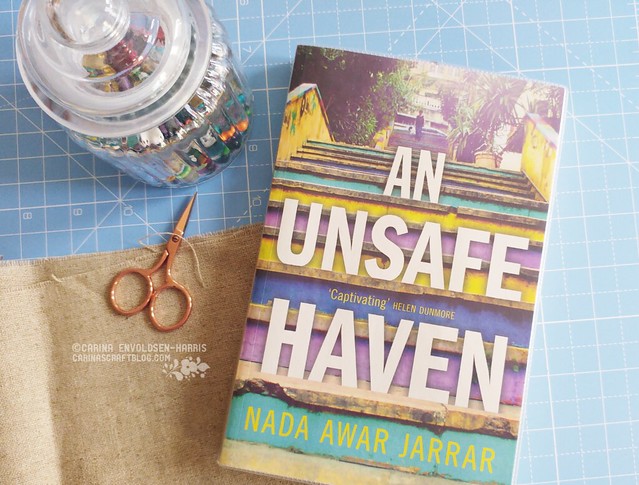 I really like historical fiction and fiction with a bit of a magic touch to them. Those are my go-to genres, I think. But because I’m making an effort to read more this year, I want to expand my reading to other genres as well.

I picked up this book, An Unsafe Haven by Nada Awar Jarrar, at the library a few weeks ago. At first I was a bit skeptical, but I actually became pretty captured by it.

Here’s the first bit of the synopsis on goodreads:
Hannah has deep roots in Beirut, the city of her birth and of her family. Her American husband, Peter, has certainty only in her. They thought that they were used to the upheavals in Lebanon, but as the war in neighbouring Syria enters its fifth year, the region’s increasingly fragile state begins to impact on their lives in wholly different ways.

The book is set, mainly, in Beirut in Lebanon. A friend of mine lives in Beirut so that was another reason to pick this book. :-)

There are themes in this book, the uncertainty of living near a war zone for example, that I can’t relate to as such. But there are also themes regarding what home is and belonging to a place. And those I can definitely relate to.

It is a fairly short book, just shy of 200 pages, I think. When I finished it, I wished that it were longer. I wanted to know what happened to the characters. They felt like real people. Which is interesting because often characters feel just like that, like characters, not people you would see on the train or at the supermarket. (Or maybe that’s because I read historical fiction and Eleanor of Aquitaine isn’t in the habit of going to Tesco!)

The book is beautifully written and there is a sadness in most of the characters. Or maybe it is something else.

I finished the book several weeks ago, but moments from it keep drifting through my thoughts. Almost like memories of a place I have been (although I’ve never been to Lebanon). If that makes sense at all?

Any book recommendations you want to share in the comments? xo