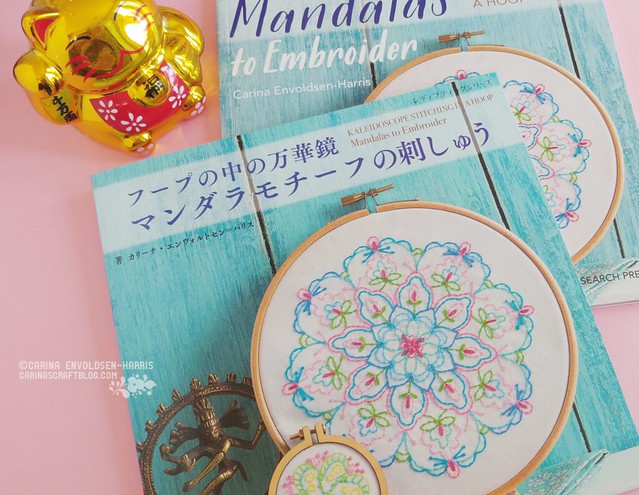 Ok, this is veeeery exciting! Mandalas to Embroider will be published in Japanese!! I have known about this since the end of last year, but yesterday I received a parcel from my publisher with a few copies of the Japanese version! I did not expect it this soon because I think it will be a while yet ’til the Japanese version hits the stores in Japan.

When the postie knocked to deliver the parcel, I was on Skype with my mum so she got to ‘be there’ when I opened it. When I realised what was in the parcel I said very loudly “OH MY GOD!!” and my mum was all “what is it, what is it?!” :-D

I am a big fan of Japanese craft books, some of my favourite craft books are Japanese. Even though I can’t read them, there is just something special about them. So to have one of my books published in Japanese is truly a wonderful thing. I mean, never in my wildest fantasies did I imagine that one of my books would be translated to Japanese!

The Japanese version is a little bit different from the original. Although whether any of the text is different, I couldn’t say since I can’t read it. ;-)

The main difference is that there are no iron-on transfers. I don’t think there are, generally, in Japanese embroidery books. Atleast not in any of the books I own.

If any of you can read Japanese, is the title the same as/similar to the English title?