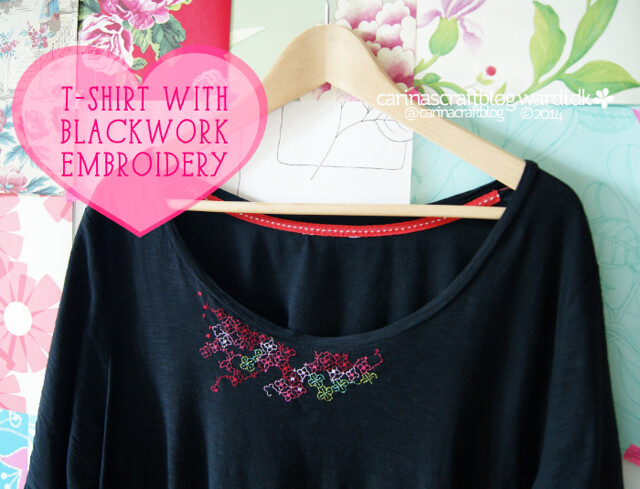 I made over my basic t-shirt with some colourful blackwork embroidery. I’ve had this kinda boring black t-shirt for a while. When I bought it I knew I wanted to add some embroidery to it, but for some reason it took me ages to decide what exactly to do with it.

Since I’ve been kinda obsessed with blackwork for a little while I thought I would use that, but not in black. And to use it in a sort of fragmented way. I wasn’t entirely sure it would work out, but I am so chuffed with the result. :-)

I used two different variegated DMC floss colours, green and pink. I like how the variegated floss makes it look like I have used several shades of each colour. I did most of it using one blackwork pattern, in pink, but in a few places used a different one, in green, just to mix it up a little bit. 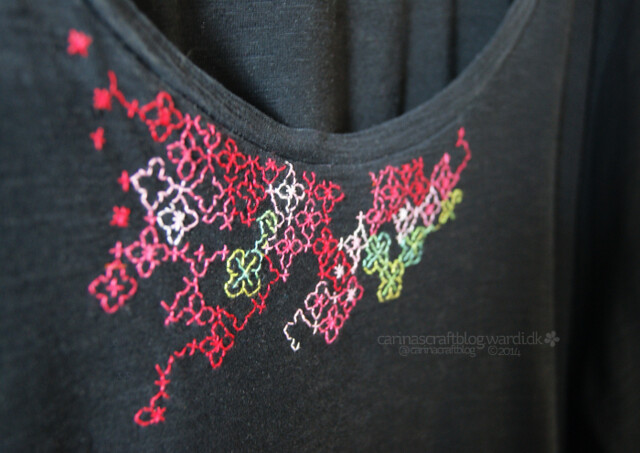 Since attempting any kind of precise stitching on t-shirt material without a stabilizer is pretty difficult, I used 14 count waste canvas which worked an absolute treat! And of course it comes with a built-in grid which is handy for doing counted work like blackwork patterns.

I didn’t have a plan for how much or where I was going to stitch. I basted the waste canvas just off centre on the front of the t-shirt and started stitching. And then I stopped when I couldn’t be bothered to do anymore thought it looked nice. Removing the waste canvas took quite a while, because I had to be careful not to rip the floss.

It takes time to customize your clothes with embroidery, but it is so worth it, don’t you think? You get something that is exactly how *you* want it and completely unique. And it expresses who you are. I think that’s definitely worth the time and effort. :-)