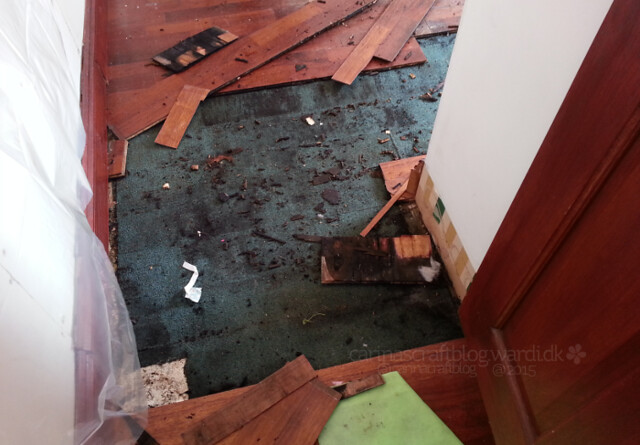 Remember the soggy studio floor? Well, it got pretty bad. So bad that I didn’t want to use it. We moved my desk to the conservatory and I’ve been using that as my sewing room. Slash Tony’s bike room. Fun times. :-)

What we found under the broken and distorted laminate floor is almost beyond belief. There was carpet underneath the laminate. Under that there was concrete. In a small section there was also vinyl floor between the carpet and concrete.

Seriously, who does that sort of thing? Surely any sane person would remove the old flooring first?! Amiright?! I have to say there were a few choice swear words when we found this. And a few tears as well (me), because it just seemed…like such a huge task to get it done.

There was mold under the floor, we knew that, but obviously now we could see why. Soggy carpet is a nice place for it to spread when there’s nowhere for the water to go. No wonder it didn’t exactly smell like roses in the studio. Yuck.

All the flooring has been removed now, and we’re letting the floor dry out. It already smells a lot better without that horrible carpet. That’s an improvement in itself. 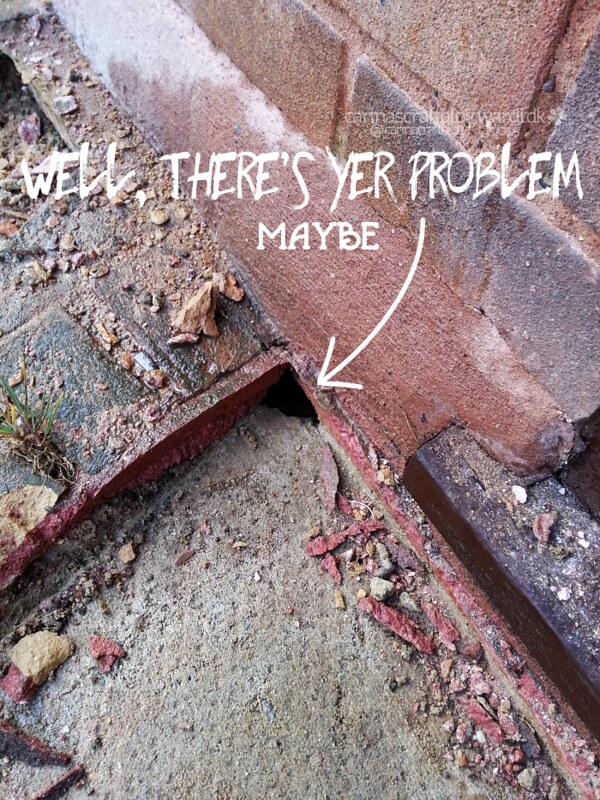 We think this may be where the water has come in. There’s a hole under the paving slabs by the door, going under the wall of the studio. We have tried to run some water under there, but probably not enough to make it come up through the floor.

At one side of the studio there was a false wall, for no god reason, apparently. That had to go so the floor could be removed. In the process we’ve probably gained about ½-1 square meter of extra space. So that’s one little bit of a good thing in all this mess. Of course, now we’ll need to basically rebuild the whole room. Get a plasterer in and possibly someone who can water proof the floor (if you know what kind of person does that sort of thing, do pipe up in the comments, we’re kinda clueless about this sort of thing!)

I guess the good thing is that once it’s all done, I’ll have a nice ‘new’ studio to work in. But first it’s going to take a lot of time, energy and money (ugh). And because we’ve had to take up some paving slabs in the garden (it’s all paved), we’ve decided that we’re going to continue taking out the rest of the slabs and give the garden a wee bit of a makeover too. Atleast then we’ll have a nicer garden for the summer. Looking at the bright side here! :-)