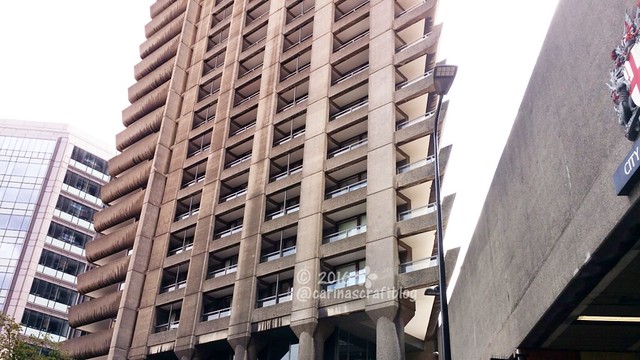 On Sunday I went to London. After the monthly Modern Quilt Guild meeting I got on the Tube to Barbican to check out the Barbican Conservatory which I have been wanting to visit for ages.

Of course, the Barbican is a bit of a destination in itself. Atleast if you’re interested in architecture. Whether you like the Barbican or not… it’s not for everyone, that’s for sure. I both like it and dislike it. I think the dislike is mainly because of the drab grey colour and the weird material covering the concrete. It’s like pebble dashing that’s on acid or something. Very odd. But from a distance you don’t notice that so much. 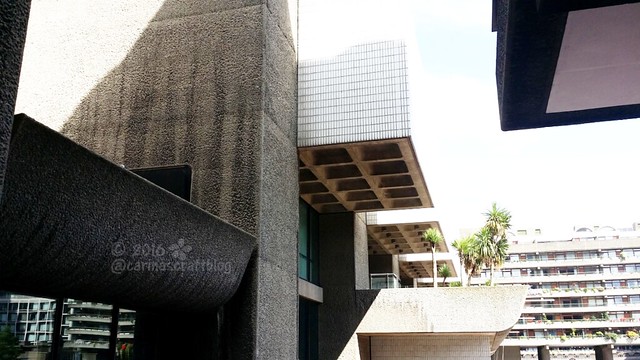 All those angles going this way or that. And there’s quite a lot of greenery, which you probably wouldn’t expect. Even a little lake.

I like the corners and angles and surfaces. There’s a pleasant minimalism in the ‘brutalism’. The lack of much architectural decoration gives it a very zen feeling. 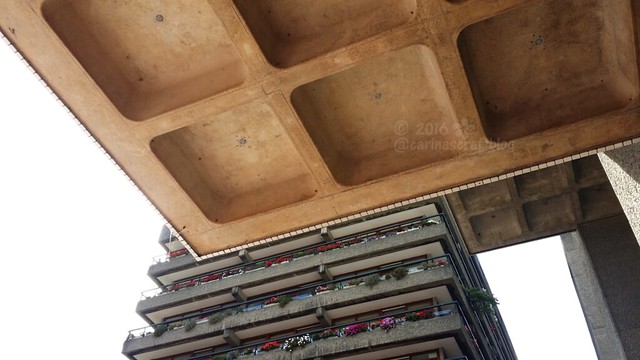 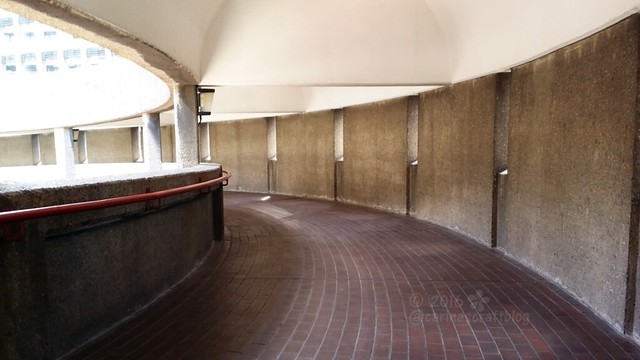 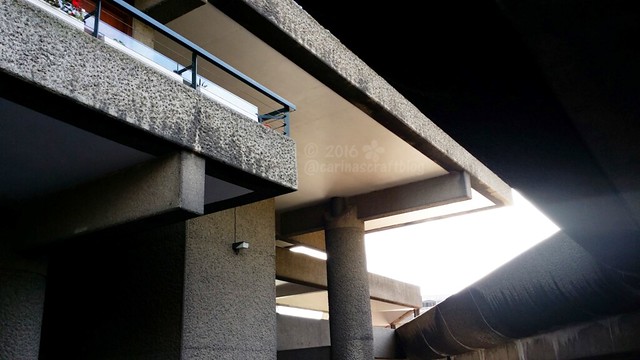 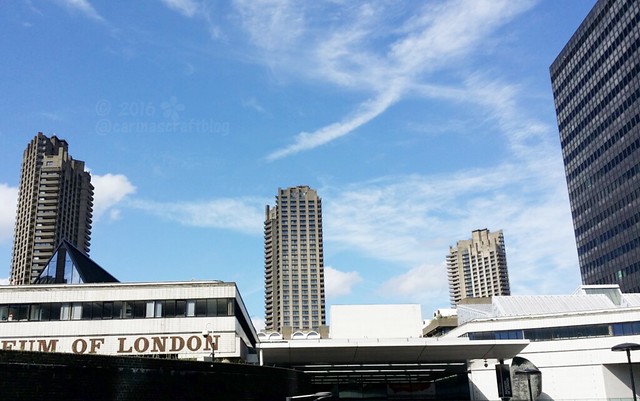 The towers dominate the skyline. 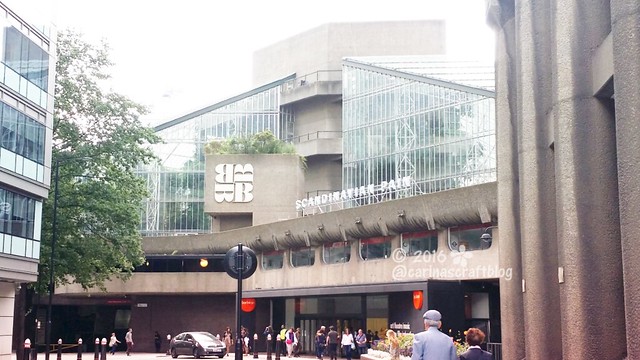 This is the Barbican Conservatory. It’s a bit of a hidden gem, but well worth the trip if you like conservatories and want to see some tropical greens in the centre of London. It is the second largest in London – the top spot is at Kew Gardens of course. 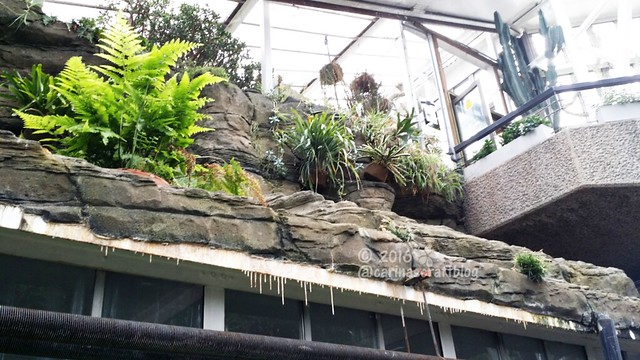 The Conservatory is only open to the public on (some) Sundays. Check the opening times here. 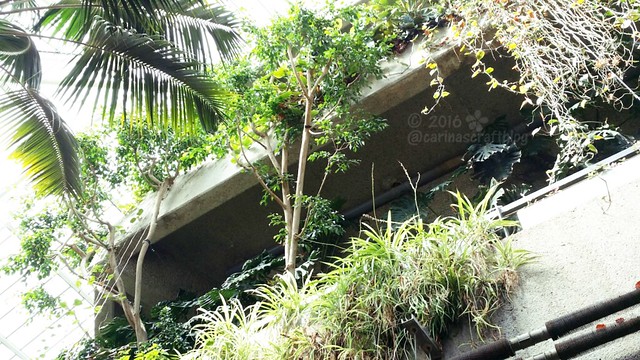 It is an interesting contrast between the plants and the architecture… 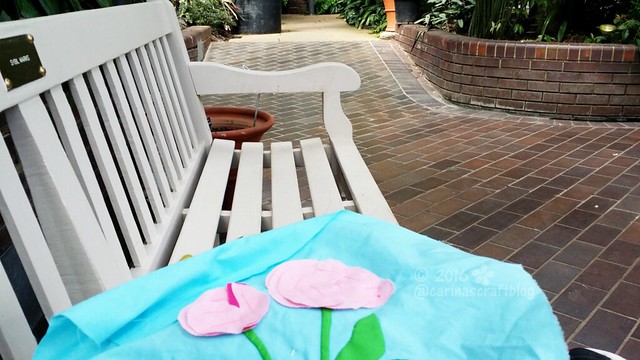 It’s quite warm in the conservatory but once I had acclimatized to it, it was lovely sitting there with my appliqué. Listening to the water feature in the nearby pond. And the laughter from a photo shoot going on among the palm trees. 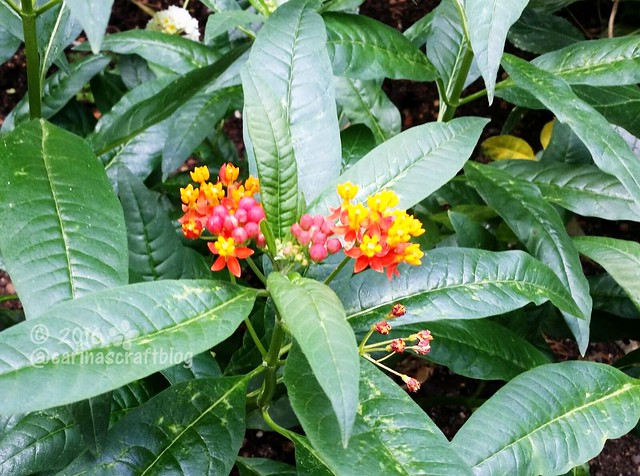 Lots of interesting flowers to look at… 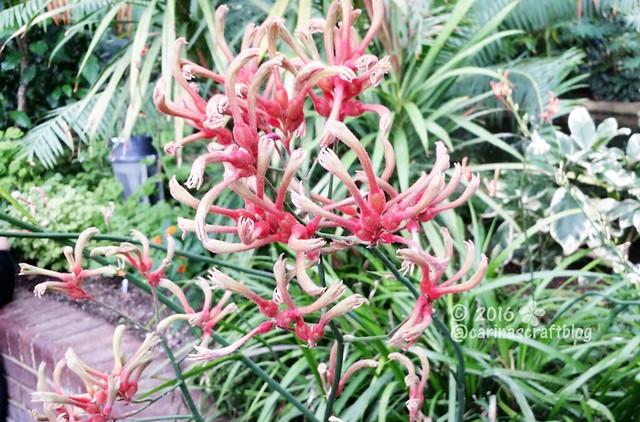 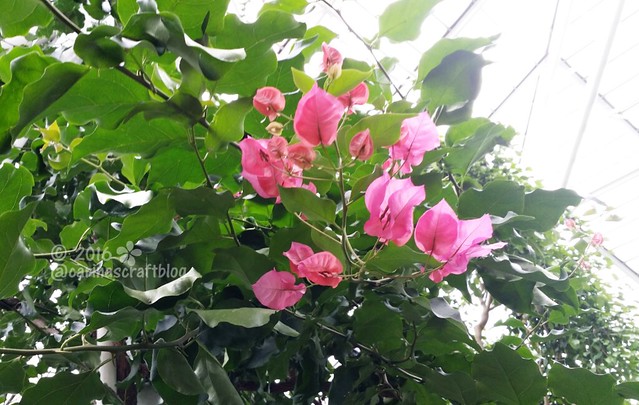 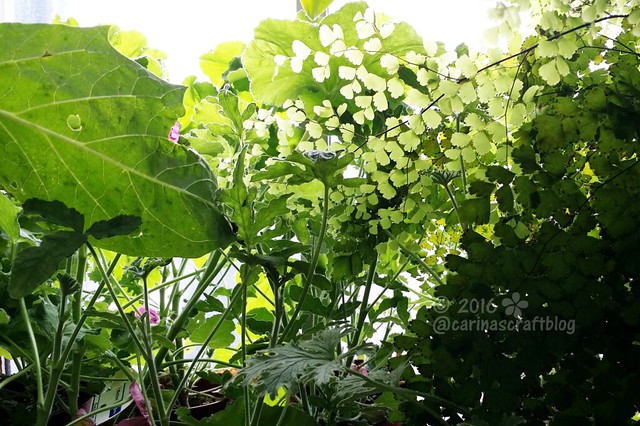 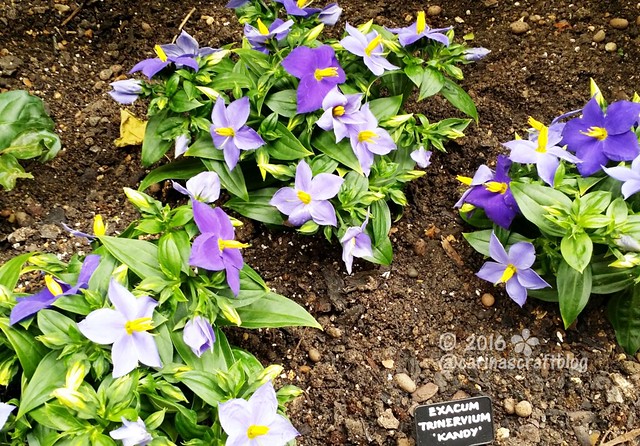 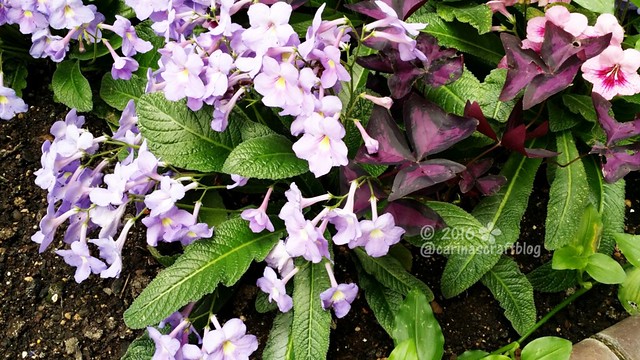 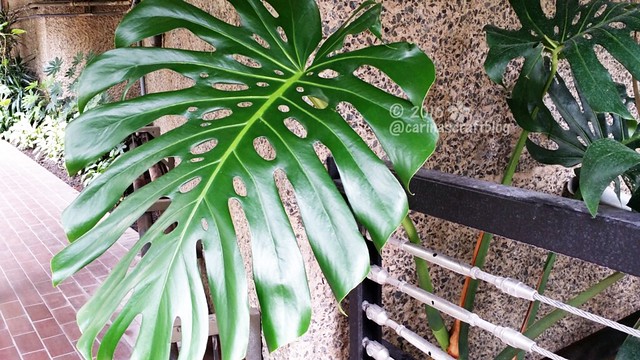 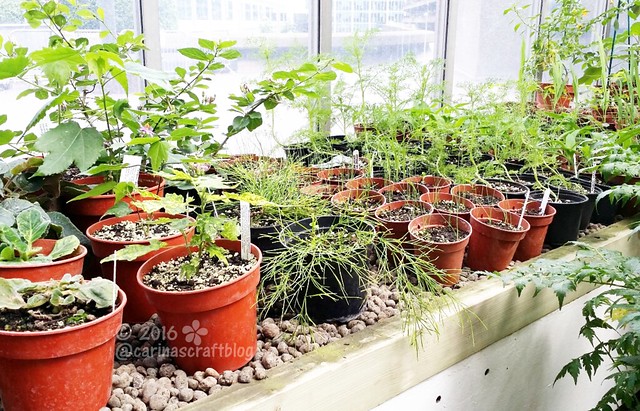 They were also growing lots of plants in pots. Different types of chili and other edible plants. 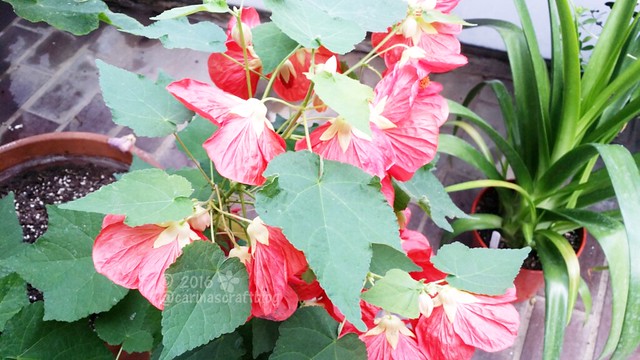 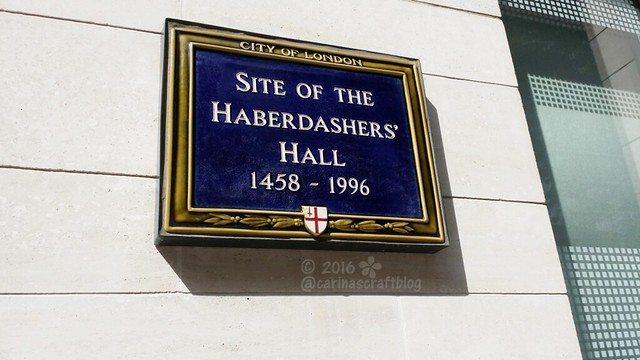 After I was done at the Barbican (and found my way down to street level – it is a bit of a labyrinth!) I wandered down to St Paul’s via Guildhall. Although that seemed to be shut off, so I couldn’t get in to look at the outline of the Roman amphitheatre.

But I did come across this nice plaque for the Haberdashers’ Hall. Consistency is the name of their game. Over 500 years in the same spot! And across the street from the Wax Chandlers’ Hall.

This is one of the reasons I love London – you can’t take ten steps without stumbling across some historical tidbit or a monument or a curious street name. 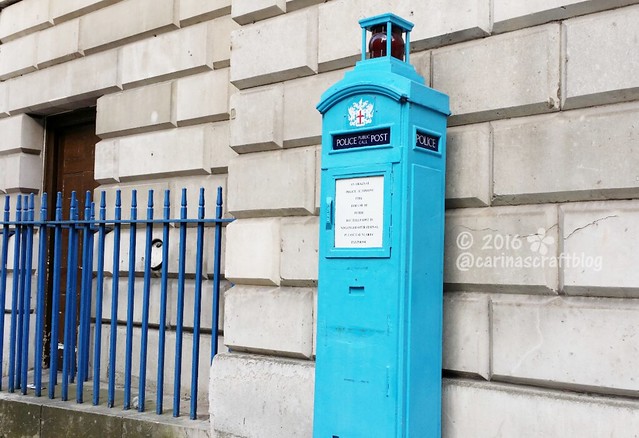 Not a Tardis police phone box, but a police call post. I like the colour of it. I spotted a couple of these. 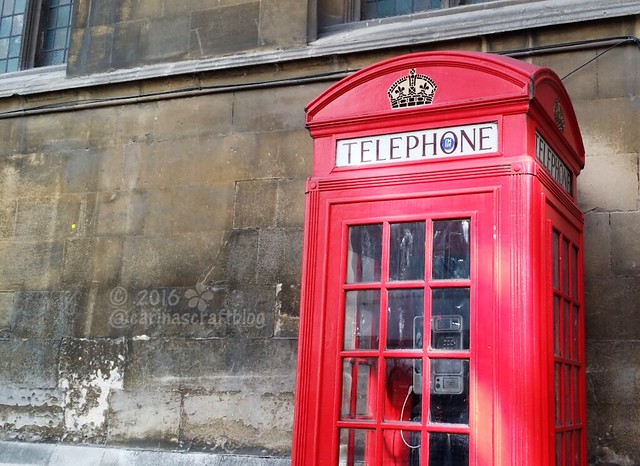 I don’t know who actually uses the red phone boxes anymore but I am glad that they can still be spotted in London. I mainly took a picture of it because of the sticker. It’s tiny, can you spot it? :-)

London has grown on me since I’ve lived here – and especially since I have started exploring properly and wandering the streets, building a mental map. If we were ever to move to Denmark, I could make do without most things in England, but I’d miss London very much. ♥