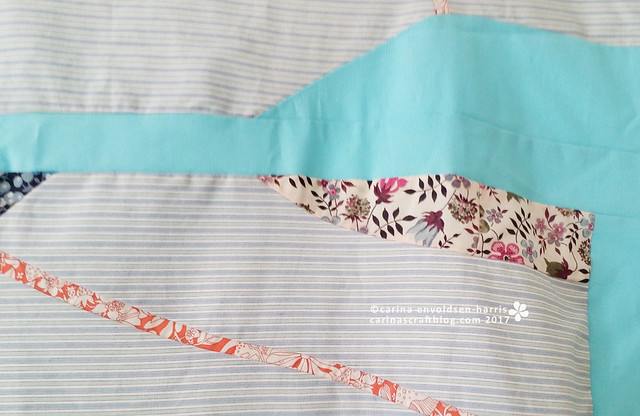 In the quilt guild, we have a challenge at the moment. We were each given a few pieces of Liberty lawn fabric at the start of the year to use in a quilt. There were some rules to how we could make it. I think it was something like we can only use the Liberty fabric we had been given, so no adding from our stash (not hard for me since I barely have any Liberty fabric!) and it’d be good to use fabric in our stash/repurpose fabric.

I was sorta inspired by the Japanese technique of kintsugi, where pottery is repaired with lacquer mixed with gold dust and this makes the pottery even more beautiful.

So I had a look at my stash of Tony’s old work shirts and picked one that was fairly neutral. I cut up the Liberty fabrics and sewed them into thin strips. Then I just started making random cuts in the shirt sections. I deliberately didn’t think much about which print to put where, I focused more on finding a strip of the right length.

Once I had used up as much of the Liberty strips as I could, I pulled a solid colour from my stash. I used that to add to the short sections to square them up into blocks. And then I sewed the blocks together. It’s all a bit wonky because it’s cut only with scissors. No squaring up with ruler and rotary cutter. 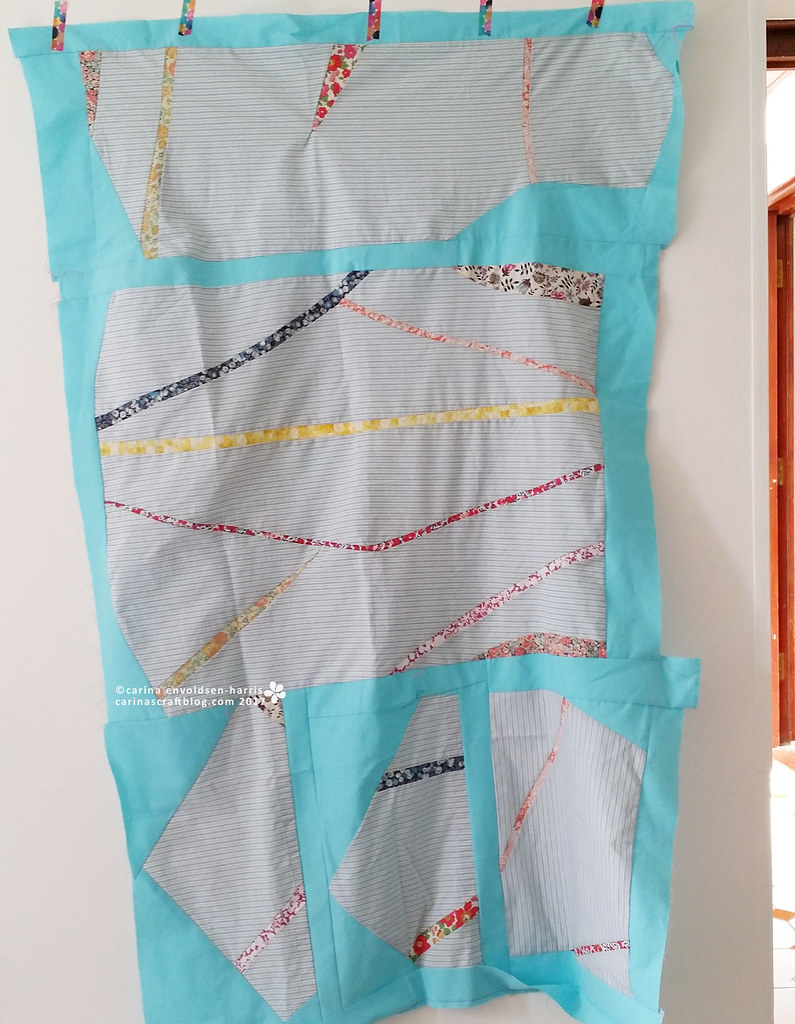 This is the result. For now. I have tried really hard to not judge the result or compare it to what I may have imagined it would look like. It does mostly look how I imagined. But. But, but, but. I’m really not diggin’ it. I can’t put my finger on why, exactly.

I have no problem with the wonkiness. I like that you can tell that some of the fabric used to be a shirt. I don’t know. Maybe it’s the overall shape of it. I’ve been thinking I might take another old shirt and do the same thing with the Liberty stash I do have and then sew the two together to make something that is more square. Or atleast bigger. Or something. 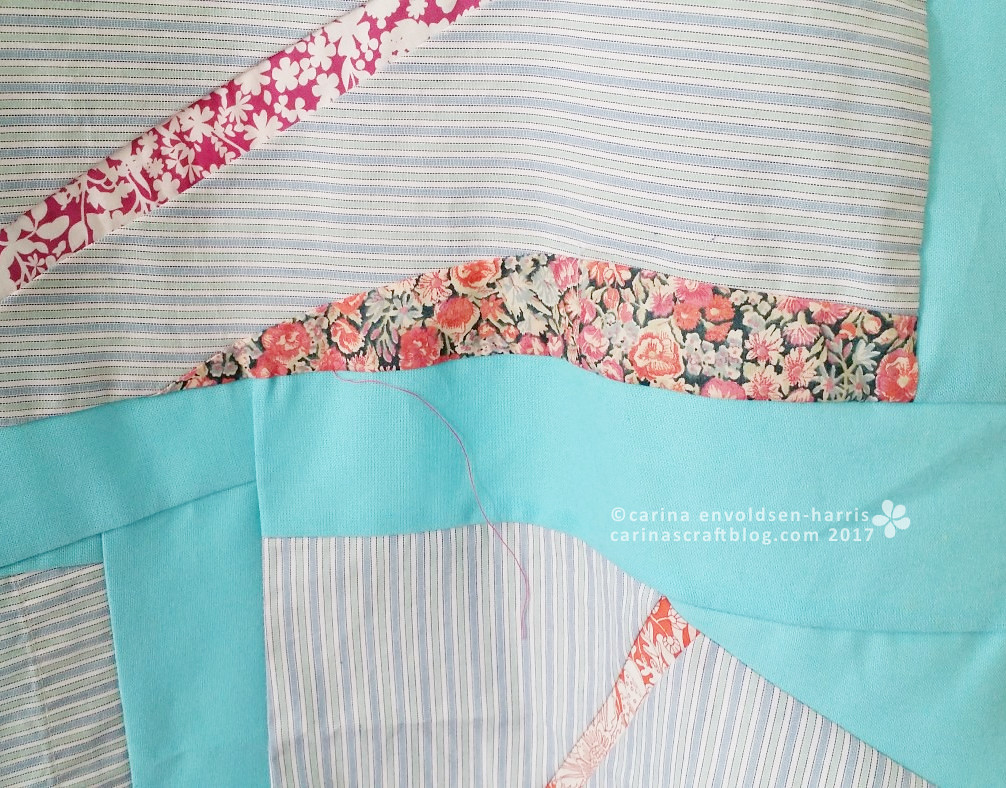 Then again. Whenever I fold the quilt top, like in this photo, or the one at the top, I keep thinking “oh I quite like this section, or that section”. So maybe I’ll just cut it into square-ish squares and make a top from that. Who knows. I have put it aside for now and then I’ll come back to it with fresh eyes at some point. 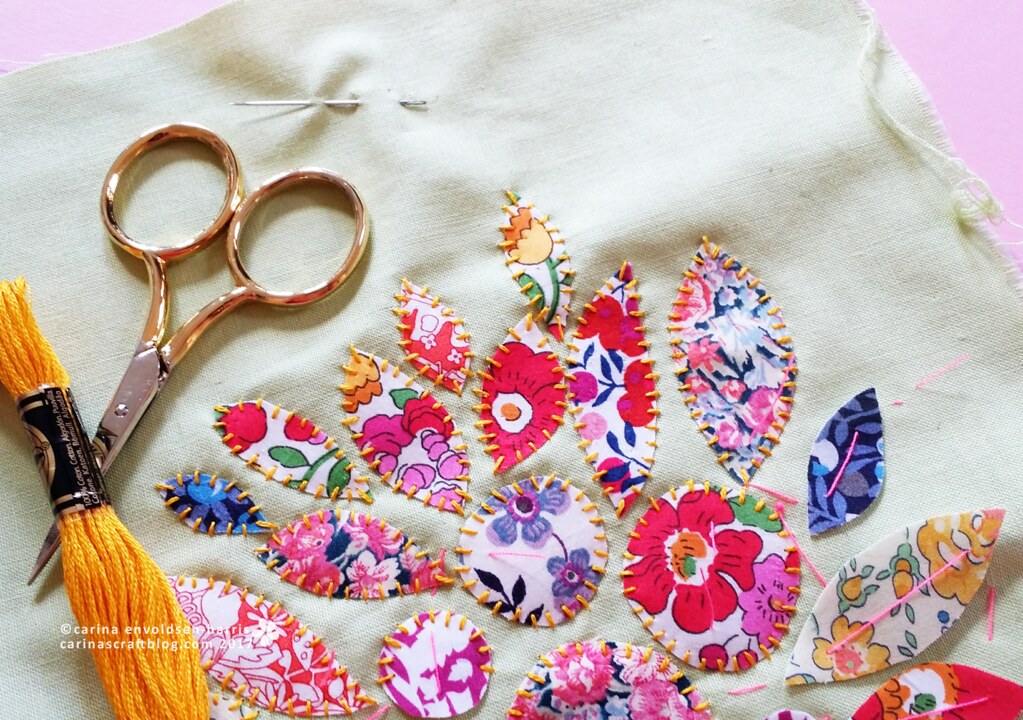 I had some tiny Liberty scraps leftover. Liberty is too pretty to throw away so I saved them. Pondering what to do with them for a couple of weeks. This is what I did with them: ironed them onto some light weight interfacing so they wouldn’t fray too much. I cut out random leaf and circle shapes. And then I just started playing with a layout.

Once I found something I liked, I tacked it all down and now I’m slowly stitching the shapes to the background. What I’ll do with it when I’m done, I have no idea. I’m just enjoying the process of simple stitches. :-)