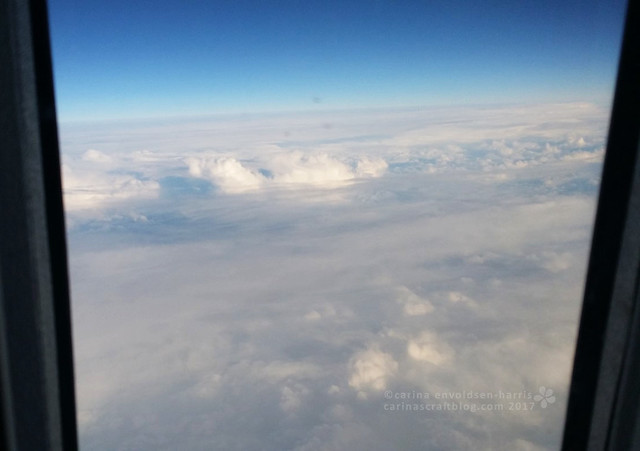 I have finally started going through the photos from my California trip and I’m going to share some of them with you. I took a lot (!) of photos, so I’m going to split them between a few posts. I don’t want you to get photo overwhelm! And it’s probably best not to sit and edit dozens of photos in one go. 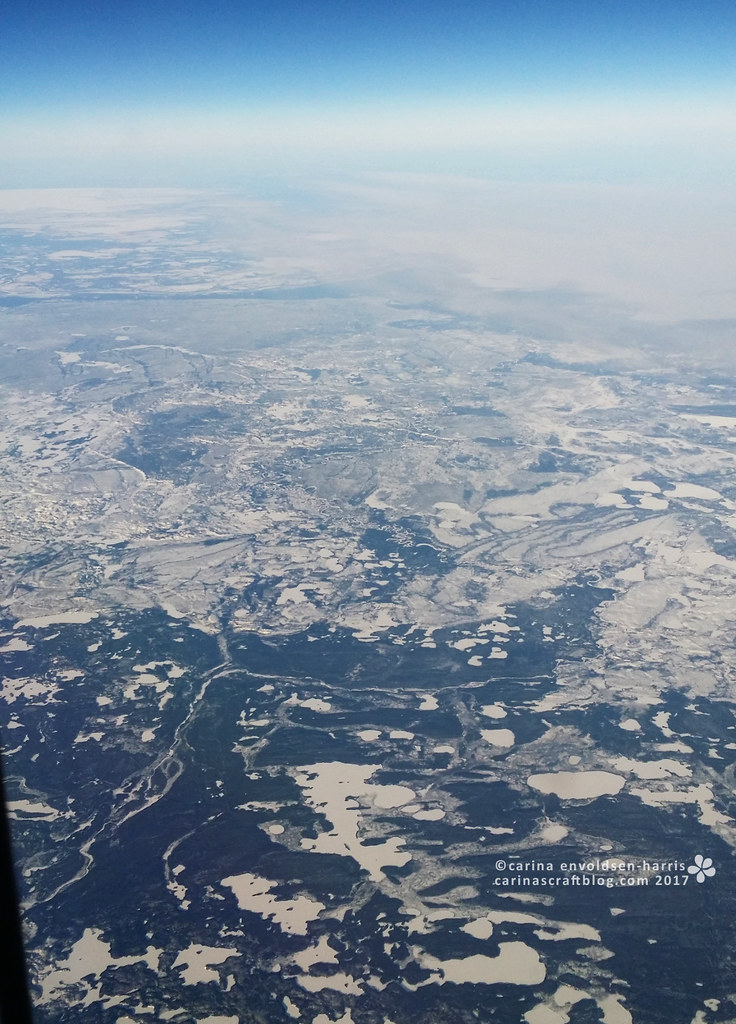 Canada from above. I spent quite a while just standing by the window in the galley looking out/down. Sadly, it was cloudy when we flew over Iceland and Greenland, but Canada isn’t too shabby!

Actually, it’s kinda weird that I can look out of an airplane window, because I am not goo with heights at all. Maybe it’s because it’s kinda surreal to be that high up, so the fear is overridden by ‘holy carp, this is so weird and amazing!’ Or something. 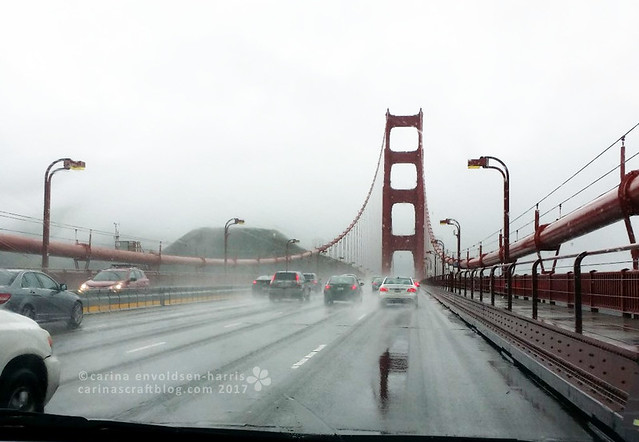 It was raining when I arrived in San Francisco. But the Golden Gate Bridge was still nice. 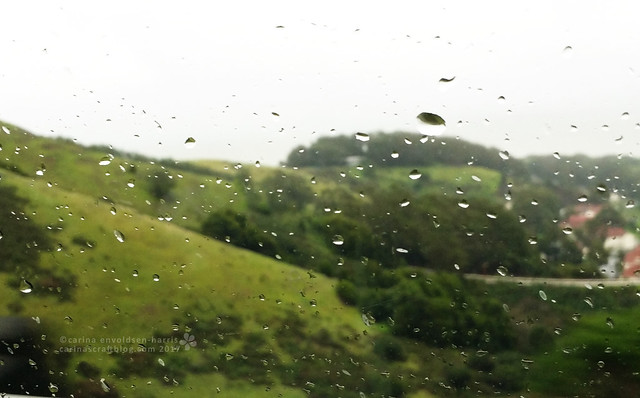 I really like this blurry shot of somewhere in Marin county, taken from the car. The rain on the window gives it a beautiful depth. :-) 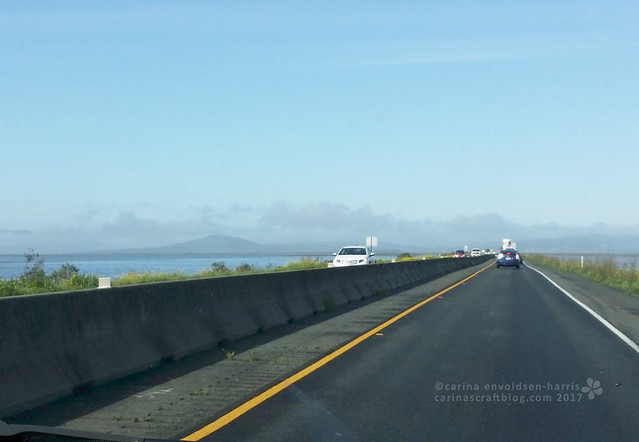 The following day was a completely different story. Look at this, blue skies and just a bit of cloud. My sister had a doctor’s appointment, so I tagged along to keep her company.  This causeway goes through San Pablo Bay National Wildlife Refuge. It was beautiful, with lots of different birds. 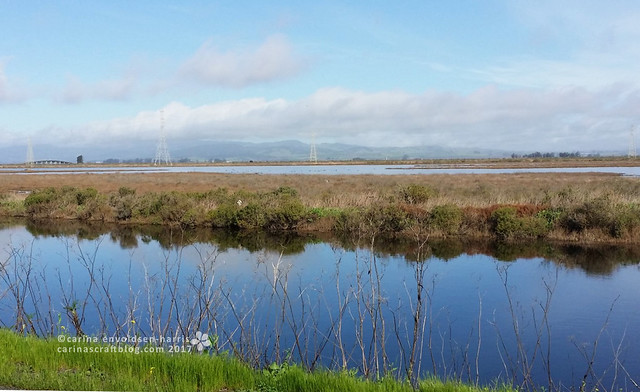 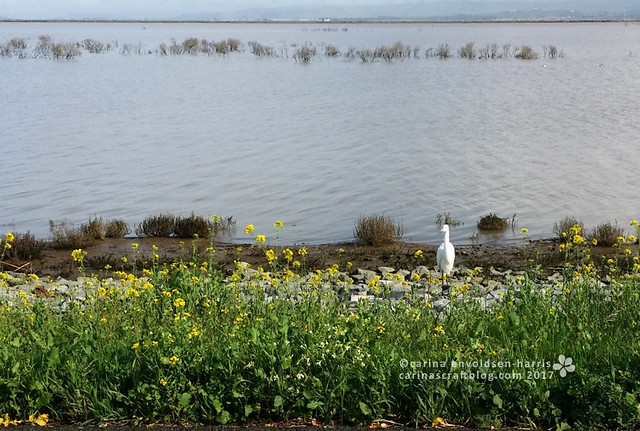 Some kind of bird. My sister is mad about birds, many birds were pointed out on our various drives. Birds are not my thing, but I did learn to recognise a turkey vulture. 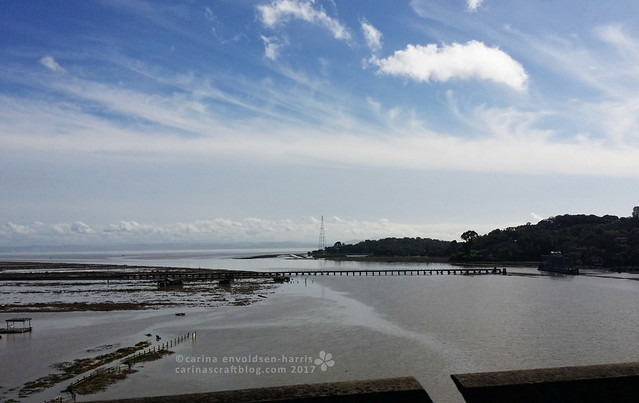 Ack, so pretty! There was a lot of extra water because they’ve had a lot of rain this winter. In some places trees were almost completely submerged. 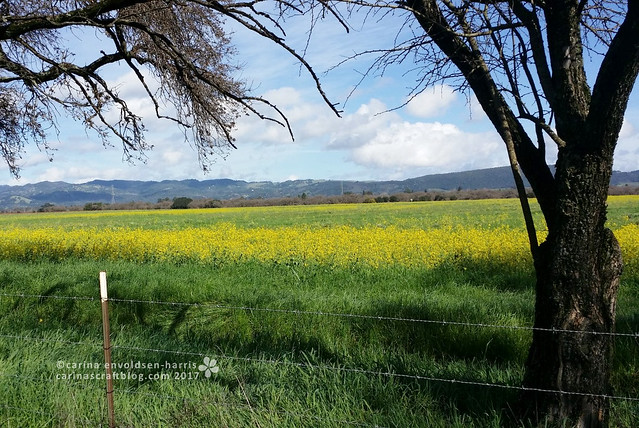 A common sight in Napa Valley in spring, rapeseed flowers. 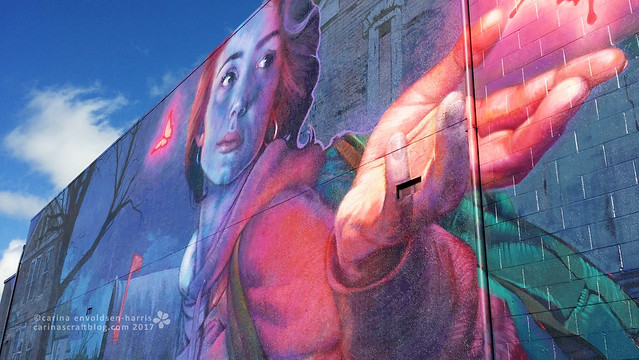 On Instagram I follow an urban art magazine, and a few weeks before I went to California they posted about a mural that had just been completed, as part of the Rail Arts District Napa. It looked beautiful, so I had to go check it out. I’m so glad I did! 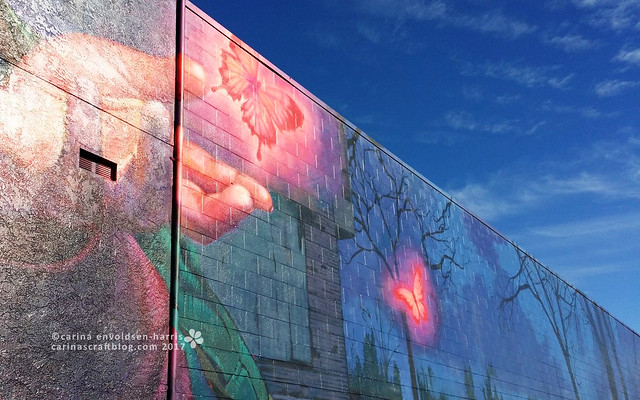 It is called ‘Knocking on Heavens Door’ by artists Bezt of Etam Cru & Natalia Rak. More pieces are coming – I think one has just been finished right next to this one. (This link should show you where they are on Google Maps.) 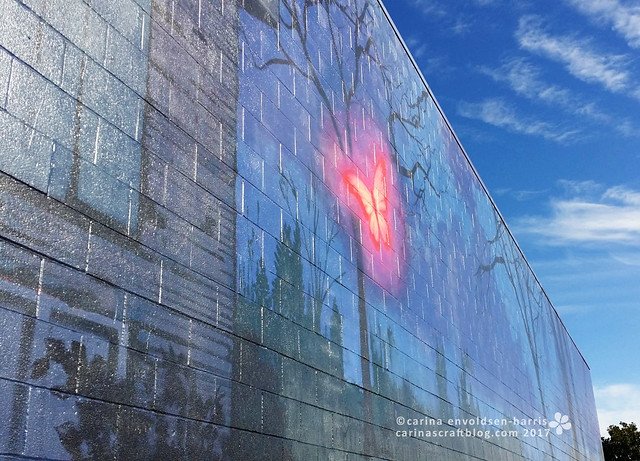 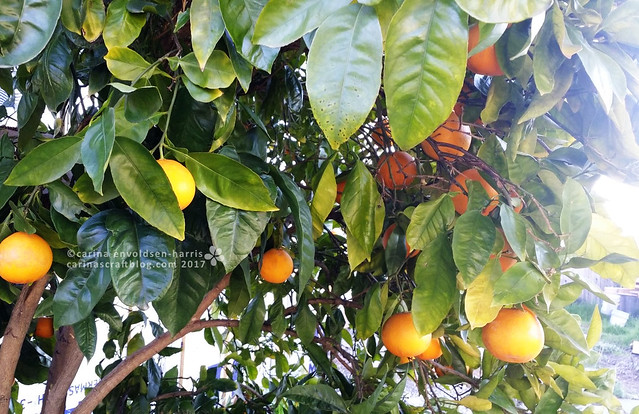 Second day in CA. Orange tree in my sister’s garden. Imagine having freshly picked oranges for your morning juice! It was delicious. :-) 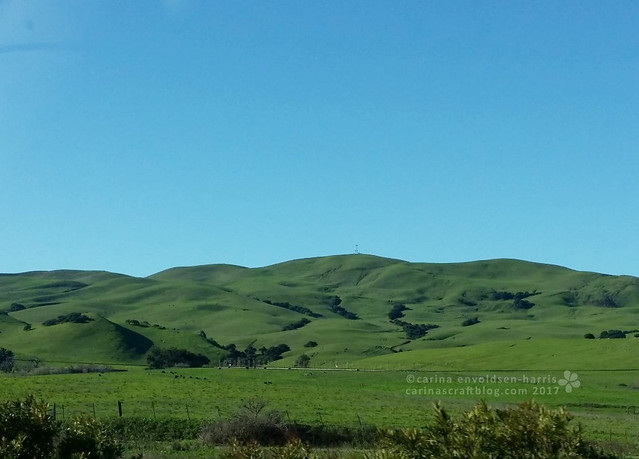 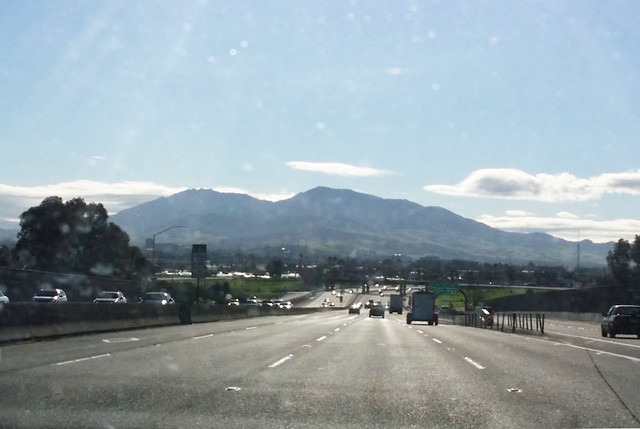 I think this is Mount Diablo. 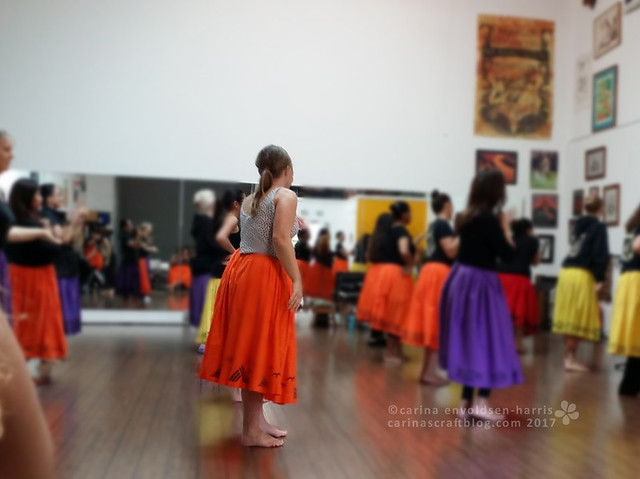 The reason we were going to Concord. My sister is a hula dancer! She got hooked on it when she lived in Hawaii. It was interesting to see!

If you come across the Nā Mamo No’eau hula dancers, that’s my sister’s crew. :-) 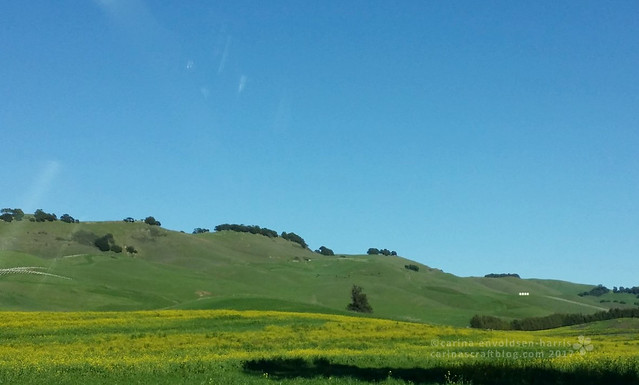 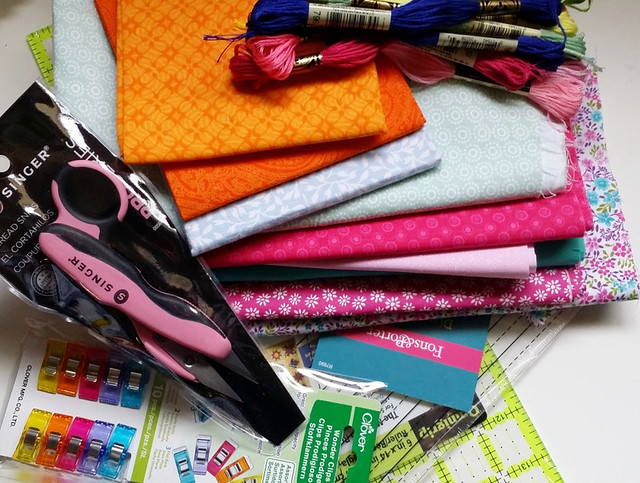 Ah yes, we stopped by JoAnn’s in Concord on the way back. This is my (modest, don’t you think?) haul of a few fat quarters and quilting rulers and a few other bits. 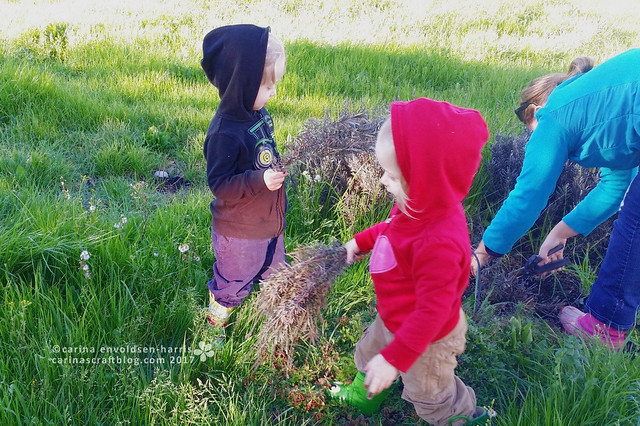 Look at these guys! Helping my sister with the weeding. Making mischief more like! :-) 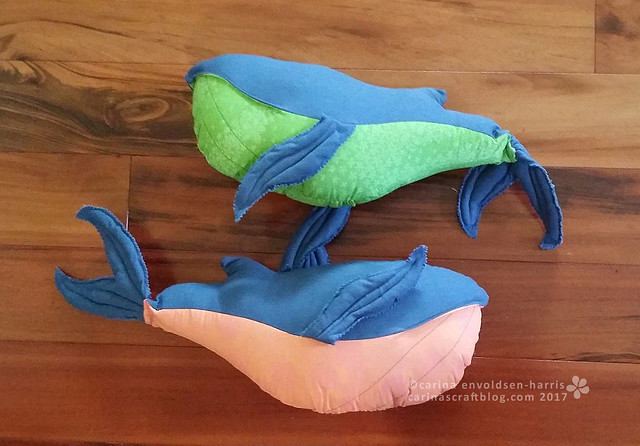 I brought over a pair of unstuffed whale softies for the twins. A flat whale takes up less space in the suitcase! Meet Carrie Fisher and George Clooney. :-D 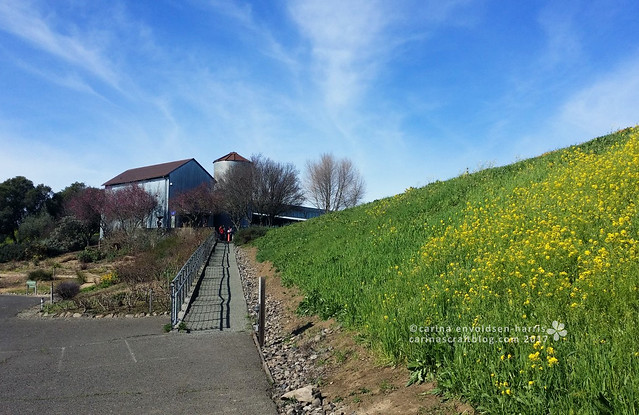 Third day in California. The whole family went to a nearby di Rosa art museum. 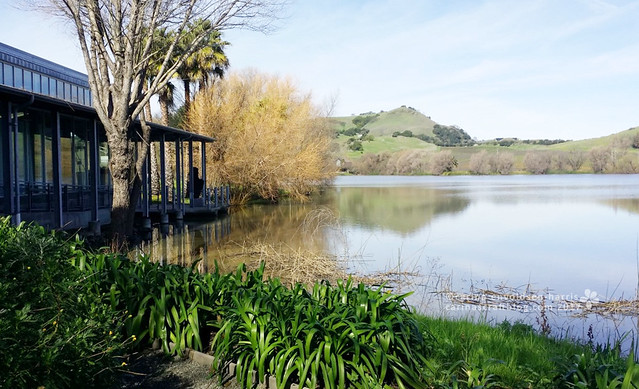 Set in a beautiful park with sculptures. Although we didn’t see those, because that was a paid tour. And with a couple of two year olds, that probably wouldn’t have been ideal. One of the people in the museum gave us an introduction to the current exhibition, but again, with at least two of the adults trying to keep the kids from touching the art, he could probably have picked a better audience. ;-) 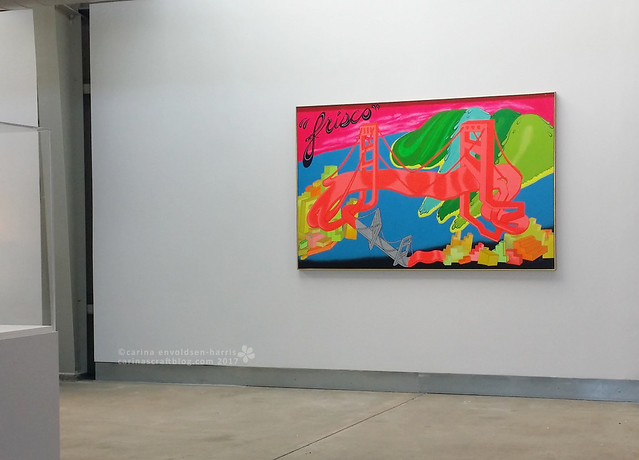 I really liked this painting. Unfortunately, I can’t remember who painted it. 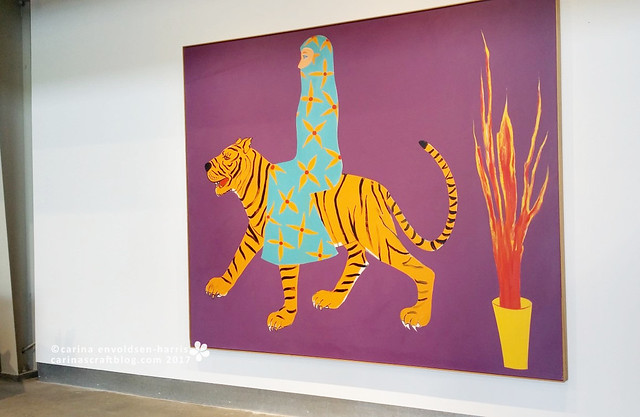 Or this one. Maybe I can look it up somewhere. If you know any of the artists, please let me know.

To end the excursion, we had lunch at a restaurant which the kids were very exited about!