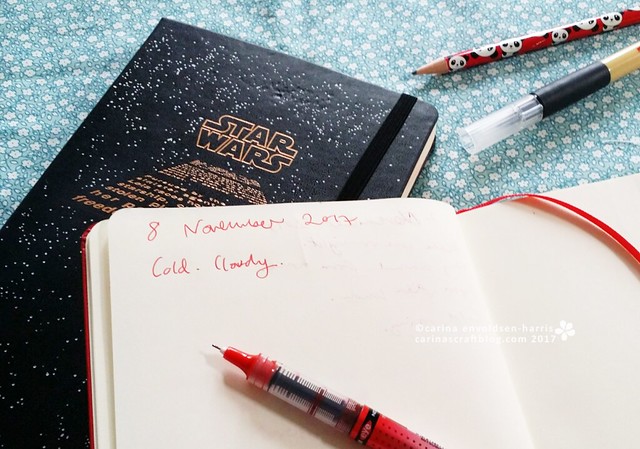 Have you ever kept a diary? Yeah, me too. I never kept it up for long. Diaries seemed too personal… like every day you’d have to pour your heart out, sharing all your inner most feelings. Even if it was just a private diary, it was just too much. And usually a big whinge fest.

At the start of this year, or maybe the end of last year, I came across a post by Austin Kleon about keeping a logbook. And that just made so much sense to me. It’s a daily list of whatever happened that day, big or small. The thing that really clicked for me was this:

Why not just keep a diary?

For one thing, I’m lazy. It’s easier to just list the events of the day than to craft them into a prose narrative. Any time I’ve tried to keep a journal, I ran out of steam pretty quick.

I’m lazy too, and the whole trying to make the day to day sound interesting…well, my life isn’t terribly interesting. But stuff does happen and it would be nice to have a record of it. A record that doesn’t rely on my memory!

But more importantly, keeping a simple list of who/what/where means I write down events that seem mundane at the time, but later on help paint a better portrait of the day, or even become more significant over time. By “sticking to the facts” I don’t pre-judge what was important or what wasn’t, I just write it down.

Since late February, I have been keeping a logbook. I used this Star Wars Moleskine Tony gave me a few years ago. I never really knew what to do with the Moleskine, because I don’t like the paper for drawing on and I don’t keep a diary/journal. But it’s been great as a logbook. It’s not too big, but it’s not too small either.

Some days I fill the whole page, some days it’s just a few lines on the page. Anything goes in my logbook. The weather. Books I’m currently reading, especially noting when I start and finish them. Work things I have worked on/finished. Going out to dinner with Tony. Days when Blake has been at doggy daycare. Skypeing with my parents or my sister.

It’s quite nice to have this record, and it’s nice to know that I actually am capable of doing a daily thing – usually I lose steam after a couple of weeks. ;-)

Do you keep a logbook? Or maybe a diary?

Leave a Reply to Ruth Anne in FL Cancel reply