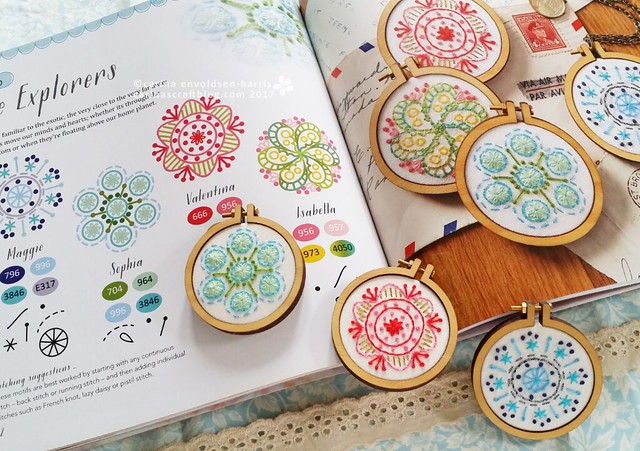 This is a spread in Mandalas to Embroider. There are 12 large motifs and 12 small motifs. The small motifs are designed to fit in mini hoops from Dandelyne. It was quite a challenge to design something that small! But I enjoyed it and I think there will be more small designs in my future!

Each mini mandala has a female name. At first I couldn’t figure out what to call the mini mandalas. Giving them numbers would be boring. A ‘Friends’ episode style title would be too long, “The One with The Green Stars”. Way too long.

In the end I decided on names of women from (mostly) science. There is a botanist, the first female kosmonaut, a computing pioneer, for example. I named some of them for my grandmothers, my sister and my niece. I really wanted to use Carolyn (Porco) but my niece is called Caroline so that was a bit too similar. So I used Maggie (Aderin-Pocock) in stead.

The three collections of mini mandalas are called The Explorers, The Gardeners and The Artists. The Explorers were named that because on that page is Valentina Tereshkova, the first female kosmonaut and Maggie who is a sort of explorer too.

The Gardeners collection name was inspired by Lucia Alma McCulloch an American botanist. The Artists was named a bit at random, I needed a name that would conjure up an idea like the other two collections. There isn’t actual an artist name in the group (not on purpose anyway). Why didn’t I use Frida (Kahlo)?!

So the names started out kind of random, but then they became a celebration of ladies who have made some kind of difference – or who are related to me. ;-)

What has been a real gift is to have Stacy, the photographer, interpret the names of the groups in such a wonderful way in styling the photos. I actually gasped when I saw the photos. So beautiful.