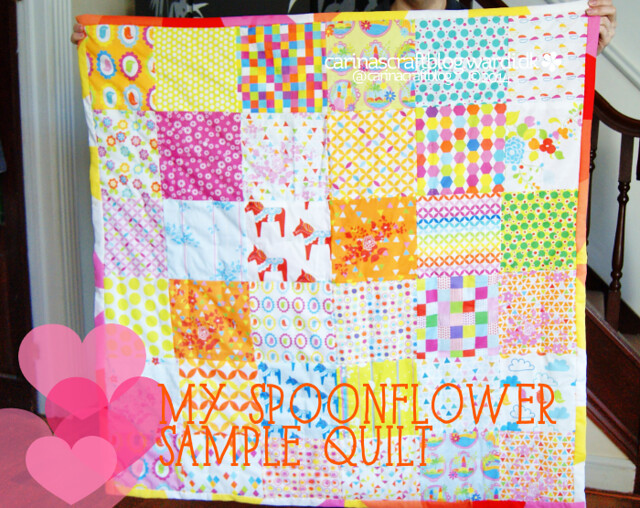 I don’t think I have showed you the quilt I made recently, using only some of my Spoonflower swatches. I’ve had some of them for years. Pretty much since Spoonflower started. I finally decided it was time to use them for something. They weren’t doing much good in a box.

So I made them into a quilt. Or most of them anyway. Some will go into a quilt for Tony and I’m keeping a few that I want to use for future projects. ;-)

Some of the designs are quite large, and I didn’t want to cut them up – I would have ended up with dismembered Dala horses and that just no good! So I just used the swatches pretty much as they were. They are supposed to be 8″ square but I found that that’s not quite the case. Some of them are larger. But apart from trimming them to the same size, I didn’t co anything else to them.

And then I just sewed them together and called it a quilt top. Very efficient! ;-) 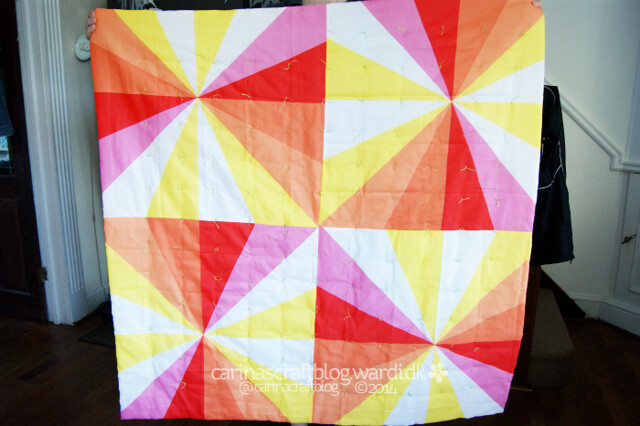 The back is even more colourful than the front – and even quicker to put together because it’s two large cushion covers from IKEA that I cut open and sewed together to form a square. This square was quite a bit larger than the top, so I used the excess to self-bind the quilt. Bonus! :-)

I tied the quilt because I love the look of that and it’s pretty quick to do.

This quilt wasn’t exactly instant craft gratification, but it was about as close as you can get. It’s not the biggest quilt ever, but it’s just big enough for two people enjoying a picnic and that was exactly what I wanted it to be. Mission accomplished. :-)

You can check out my designs over on Spoonflower* if you fancy.

*Affiliate link, yo – I get a percentage of sales of my fabrics.