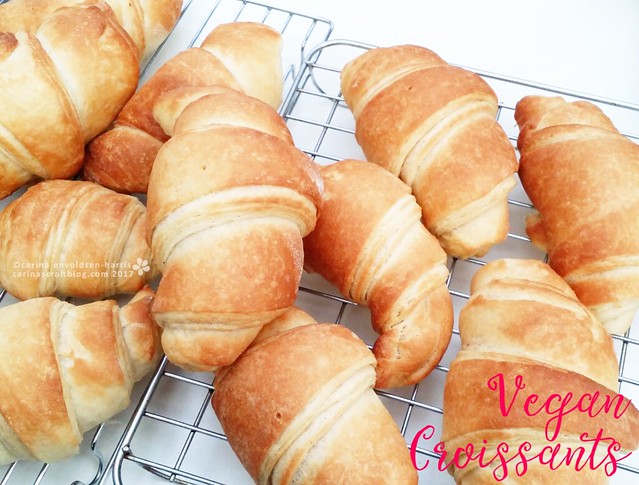 Since going vegan, there hasn’t really been much I’ve missed. Except perhaps for croissants. Croissants are the perfect combination of flaky, soft, sweet and salty. But they are of course made with butter and perhaps some milk and brushed with eggs. So no thanks to traditional croissants for me.

Tony did make an attempt at making croissants but it turned into a mess with ‘butter’ melting and oozing all over the place. So I really thought that I’d never have a croissant again.

Until! A few months later I was going through some old magazines and I came across a recipe for homemade croissants. It wasn’t a vegan recipe but the ingredients were easily replaceable. The thing that made me think ‘this could work!’ was that the flour used is Italian (style) 00 flour. This stuff is the kind used when making pasta but it also makes bakes more crunchy.

It took me a little while to find some ’00’ flour because nowhere local sells it. So I ordered some online. ’00’ flour is sometimes called pizza flour, but don’t mistake it for pizza base mix, that’s not the same thing.

So I tried making croissants and you know what? It worked! It’s not completely like a regular croissant, but it’s close enough. And I think the difference is mostly in the flakiness because of the amount of layers you can make by hand compared to what a machine could do.

Anyway, on with the recipe. It’s not really difficult to make the croissants but it is somewhat time consuming. Which is worth it because croissants! ;-)

Ingredients (for 10-12)
250 ml unsweetened soy milk (or other milk you prefer)
25 grams fresh yeast
2½ tablespoon sugar
3/4 teaspoon salt
500 grams ’00’ flour (set aside 50 grams because you may not need all of it)
50 grams soft vegan butter/margarine (I use Pure Soy) take it out of the fridge about 30 minutes before you start putting the dough together.
100 grams cold vegan butter
2 tablespoons olive oil

Heat the milk on the hob until finger warm. Transfer to a large bowl and dissolve the yeast in the milk together with the sugar.

Add 250 grams of the flour as well as the salt. Mix well.

Chop up the soft butter and mix with the dough. Then add another 200 grams of flour. Mix together until the dough is smooth and no longer sticky. Add a bit of the extra flour if necessary.

Remove any excess flour from the bowl. Put the dough in the bowl, pour the oil over the dough and turn the dough in the oil so it’s covered all over. This will prevent the outside of the dough from drying out as it rises. Cover the bowl with cling film and leave the dough to rise until double in size, about 2 hours.

On a surface dusted with flour, roll the dough to a 40 x 30 cm rectangle. Spread some of the chilled butter on one half. Not loads of butter, about the same as if you were buttering a slice of bread. Leave 3 cm unbuttered all the way around.

Fold the unbuttered half over and pinch the edges firmly together.

Roll the dough out again, to a similar size as before. Repeat the butter on one half, fold over and pinch.

Finally, roll the dough out to approximately 50 x 40 cm and cut into triangles.

Roll them into croissant shapes starting at the wide end.

Put on a baking tray and cover with a damp tea towel. Leave to rise for 1 hour.

Eat them straight out of the oven (once they have cooled of course!) or re-heat them just before eating. They can also be frozen. That is if you have any left to freeze. ;-)