The other day I realised that I don’t think I have ever shared where the name ‘Polka & Bloom’ comes from. Well, I’ll share it with you right now!

In early 2006 I was doing a lot of doodling in my sketchbook. Some of the doodles had funny creatures in them. I made some of those creatures into drawings, like those two up there. But there are plenty more. If you fancy, you can see the actual doodles plus some more of the doodle characters in this Flickr set.

And then I used those two in a couple of postcard designs: 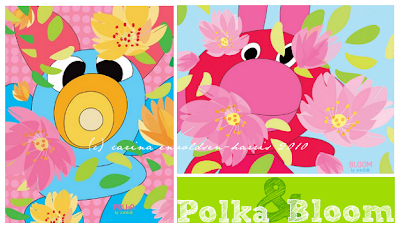 One I called Polka (because it has polka dots in the background), the other I called Bloom (because of all the flowers in it). See where this is going?

I would obviously refer to them as my ‘Polka and Bloom postcards’ because those are the names. And after saying that a few times, I started to really love the name as a name! It is kind of cute, but without being overly cute. It’s fun and colourful (I think). And, to me, atleast, it conjures up images of, well, polka dots and flowers, and I happen to like both!

I have been thinking lately that maybe I should make these doodle characters into embroidery patterns..

My first ever softie was a completely handstitched (seriously!) version of the ‘Bloom’ character. You can see it here (pardon the poor picture quality).