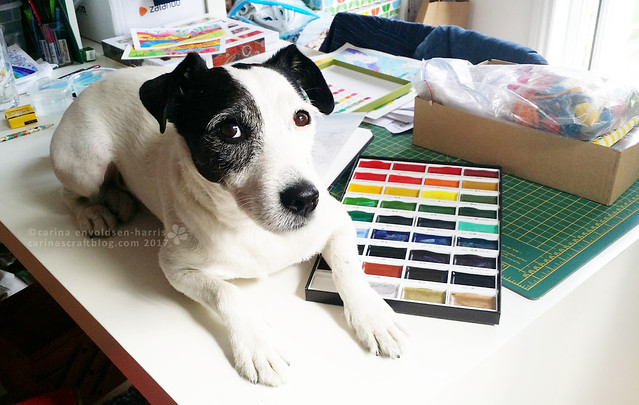 Come visit my little studio/craft room? I thought I’d posted pictures of it already, but it doesn’t look like it. Atleast not since I moved back into it last summer.

I did move into the studio when we first moved in (this is what it looked like on the very first day), but in December that year, 2013, there was one heck of a storm and it became apparent that something was really wrong because water was coming up through the floor. Not good.

I kept using the studio for a while, but then white mould started to form on the floors and then I refused to use it anymore. Also the floors were squishy every time it rained. But the mould..gross. And not healthy.

So we moved my desk into the conservatory. When we removed the floor, it turned out that there was carpet underneath! What a delicious place for mould to grow, huh? And not only was there carpet, there were also two layers of lino!

After eliminating a bunch of possible reasons, we figured out that the water would come in through a hole which had been made to pull cables through the wall. But the holes hadn’t been done properly (which is the story of this house!) so water would come in. We closed up the hole and had a guy come put a coating on the external wall, and we’ve not had any water since. Huzzah!

Last August we were finally able to fix the internal wall where we’d had to remove a ‘fake’ wall and a book case. And then I could finally move in! 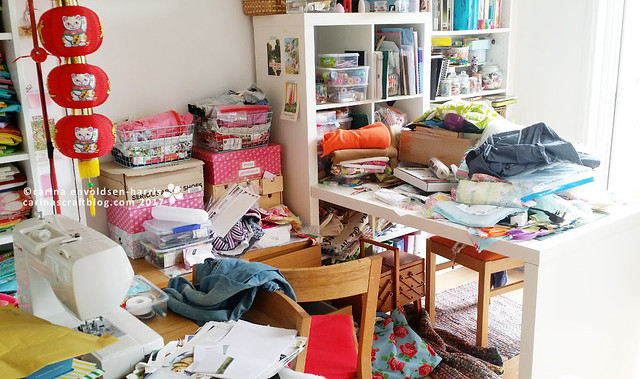 Last week, I was tidying up after a quilt project, “I’m just going to clear the desk”. But that turned into an all-day project. And the studio was an absolute mess! Just look at it!

Furniture was moved around, drawer contents were streamlined and stuff was put in the bin. And for a few days it was all nice and tidy. So I took some pictures to mark the occasion! ;-) 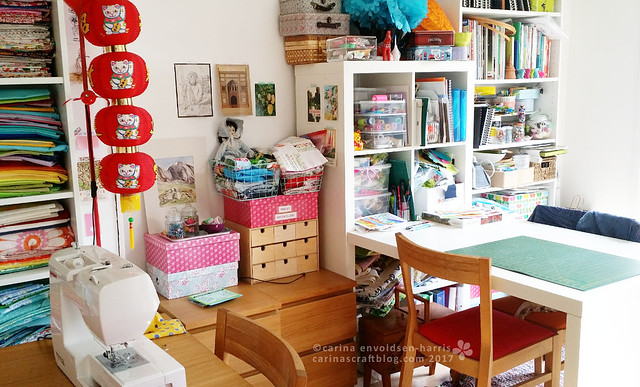 But let’s just carry on with the fantasy of the tidy studio. 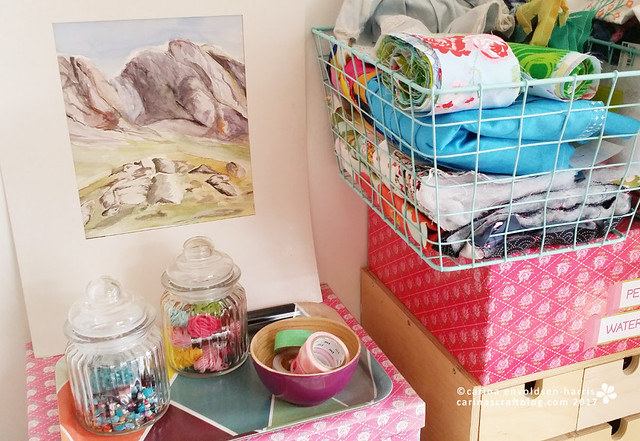 A watercolour I made when I was in 10th grade. A teacher actually offered to buy it back then, but I’m glad I kept it. It reminds me of very happy times. :-) 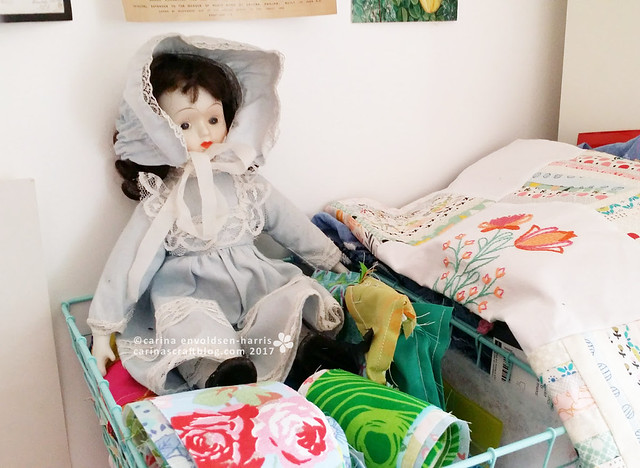 A porcelain doll my grandmother gave me. I may have been ten years old or so. She told me that she had always wanted a porcelain doll when she was a little girl, but she never had one. But she bought one for herself when she like 70. I think that is pretty great. 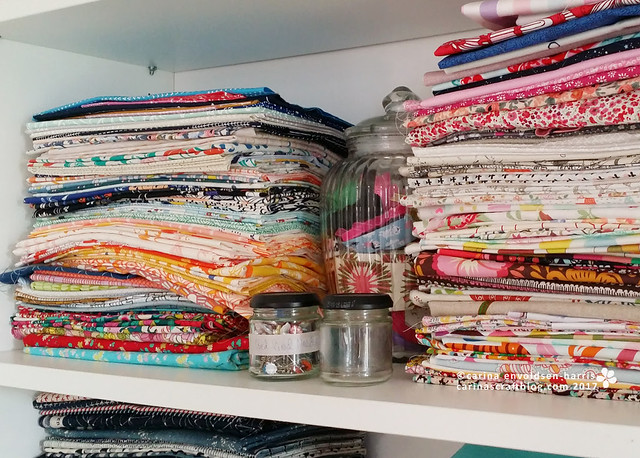 Fabrics. Some of my favourites, Liberty Lifestyle (why did they stop making those?!) and Leah Duncan. 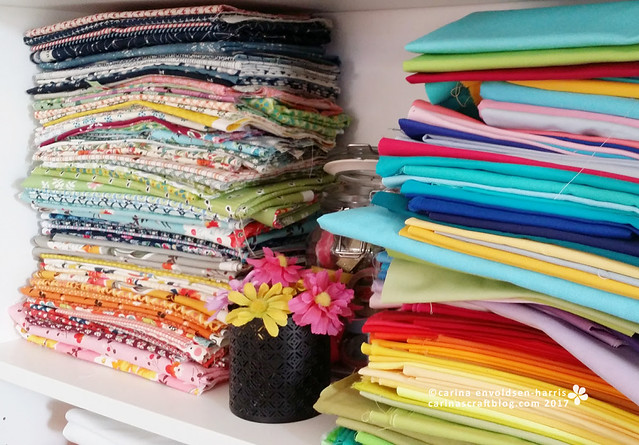 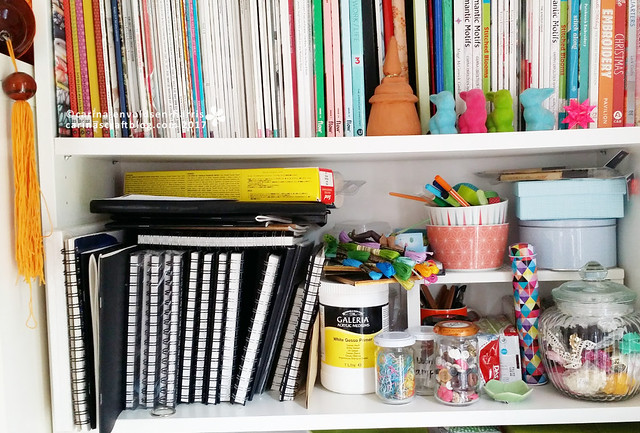 Sketchbooks waiting to be filled. I love a brand new sketchbook! I do not have any kind of ‘fear of the blank page’. :-) 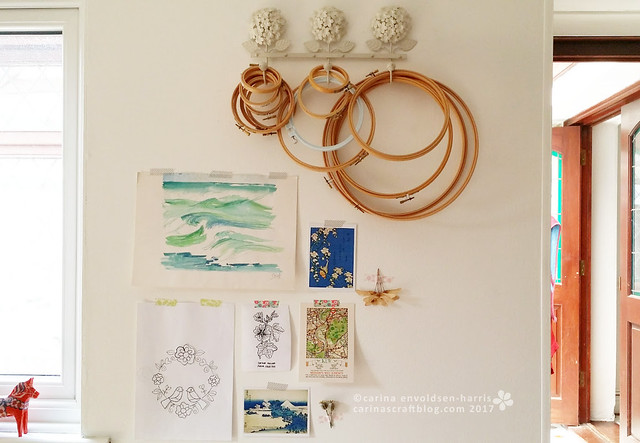 The studio is very small. This wall is maybe half a metre (at most) from the end of the white desk. I guess you can call it compact or ‘bijoux’. Not much floor space, but storage and table space is more important for me. It’s not like I’m going to start break dancing in the studio! 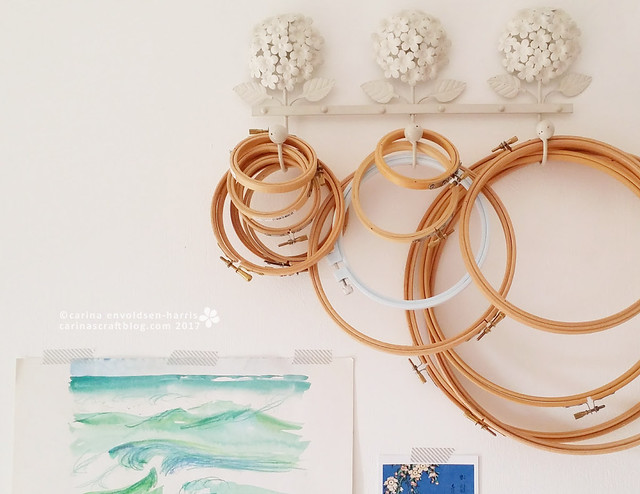 I love these hooks with the flowers. I bought them before we even moved into the house because I saw them and I knew they would be perfect for my hoops. Hoop hooks! 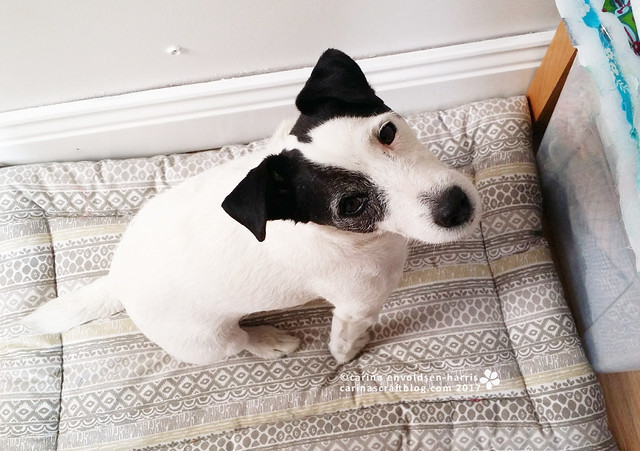 Blake has his own bed in the studio, because he’s spoiled like that. Sometimes I shut him in the studio with me so he can’t go bark at the post lady or whoever else happens to walk past our house. He’s a barky little guy.